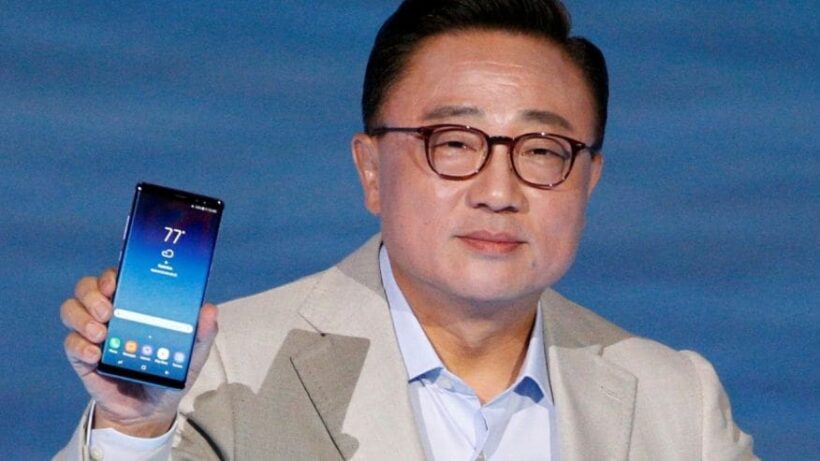 It’s impossible to appraise the sleek new Samsung Galaxy Note 8 without recalling it’s fiery predecessor, the Note 7. It got somewhat of a reputation for with catching fire or even exploding, being banned on aeroplanes and eventually just about everywhere else. It was a costly and embarrassing gaff for the South Korean electronics giant.

The Galaxy Note 8 phablet was going to have to be good, particularly with the new iPhone 10th anniversary launch coming up next month.

It’s not cheap at US$930 – will surely be over 305,000 Bt by the time it comes to Thailand – but the Note 8 kicks off a list of upcoming premium-priced handsets just five months after the release of the Galaxy S8 smartphone.

Last October’s recall of the Note 7 cost Samsung billions of dollars along with their reputation as a steady, conservative and reliable designer and builder of premium phones.

The reputation has been partially salvaged with its market share remaining up around 22 percent for the second quarter of 2017, higher than its main competitors, Apple and China’s Huawei.

With the US$900+ price-tag, the US$1,000 high-bar looks out to be breached by the new-gen of smartphones coming onto the market. The new Note 8 still has the stylus; the screen size is only fractionally larger than an up-sized Galaxy S8. The screen is part of a new design reality where screens cover a large proportion of real estate on the phone’s front face, in this case 16cm, corner to corner.

The new phone also has dual rear cameras for the first time, which will provide improved photographic options, control and picture quality. Other features include facial recognition as well as fingerprint and iris scanning. And here comes ‘Bixby’, Samsung’s voice-command assistant, the Samsung AI-equivalent of Siri and Alexa. Yes, it does have a headphone jack, probably more of a cheap jab at rival Apple who dispensed with the old mini-jack in its last phone. 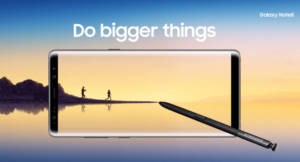 The phone comes with 64GB of internal storage, though you will be able to upgrade to more storage in the future. There’s also a MicroSD card slot, so you can add your own external storage as well. The Note 8 has lots of built-in sensors as well, including the standard accelerometer, barometer, gyro and fingerprint sensor. There’s also a heart rate sensor. The new model is water-resistant, not quite water-proof, so it’ll survive up to 30 minutes at a depth of up to 1.5 metres.

Then there’s the S Pen, a feature of the entire Note series. As usual, it’s stored on the bottom of the phone and does all the fancy S Pen tricks as on the ill-fated Note 7. You can make notes, edit and add more notes, and even post them to the display so you don’t forget about them. It’s more refined and intuitive than the S Pens of the past but you really need to watch a few of the YouTube tutorials about how to use the S Pen feature to get the best out of this signature feature.