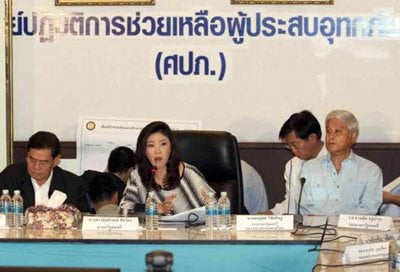 The Nation
According to a source close to the prime minister, Yingluck appeared faint, complained of a headache and vomited during a lunch break at Muang Thong Thani in Nonthaburi. She had earlier inspected a flooded area of Pak Kret district of the province north of Bangkok for almost two hours.

She did not look well and her smiles to welcoming local residents appeared forced.

During the lunch break, Yingluck excused herself and left shortly afterwards. Her schedule for the afternoon was cancelled, according to the source.

Government Spokeswoman Thitima Chaisang said yesterday the prime minister had a headache because she was exposed to strong sunlight while outdoors, but insisted the premier had not vomited.

According to the spokesperson, Yingluck ate only a light meal in the morning as she was recovering from a bout of food poisoning. She said that during her visit to Vietnam on Wednesday, Yingluck did not have solid food and only drank some water and glucose for refreshment.

“At Muang Thong Thani, the prime minister joined staff for a lunch break but did not eat anything. She left immediately after developing a headache,” the spokeswoman said.

Yingluck was discharged from hospital on Wednesday after being treated for one day for food poisoning. She went to Vietnam on a whirlwind visit shortly after being discharged.

Yesterday morning, the prime minister presided over a ceremony at Government House where state officials gathered and vowed to serve honestly, as part of the celebrations of His Majesty the King’s birthday this month. Participating in the ceremony were Cabinet members, military commanders, senior bureaucrats and civil servants, and representatives of state enterprises.

Police chief dismisses rumors about key burglary suspect
The Nation
There are rumors that the key suspect in the burglary of Transport Ministry permanent secretary Suphoth Sublom’s home last month is being protected by a personal security detail and is on the run in Laos.

Bangkok police chief Pol. Lt. General Winai Thongsong immediately dismissed this report, adding that talk of the alleged ringleader Weerasak Chuelee traveling freely in and out of Vietnam and China was unfounded.

“We found that these rumors about him are just not true,” he added. “There are so many rumors about him – that his moves are being financed and that he is being protected by bodyguards. We don’t know if these guards are Thai or Lao. These are just tip-offs.”