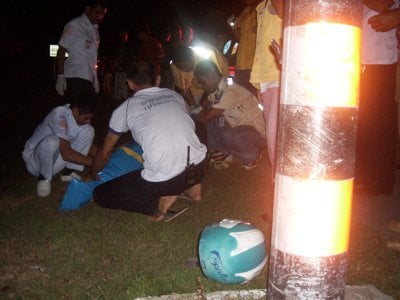 PHUKET: Phuket police have yet to confirm the identity of a young Thai man who died last night when the motorbike he was riding crashed into an electricity pole near the Heroines’ Monument in Thalang.

The accident occurred in front of the Fakthong Transport Company, about 400 meters east of the monument, shortly before 8pm.

Police and Kusoldham Rescue workers arrived at the scene to discover a badly damaged Honda Wave motorbike lying in the roadside ditch.

Nearby, they found the body of a Thai man believed to be in his mid to late-20s.

The initial police investigation indicated that the motorbike was being driven at high speed northbound from the Heroines’ Monument when the rider lost control of the vehicle and struck the electricity pole.

The body was taken Thalang Hospital for further examination and to await repatriation to relatives.