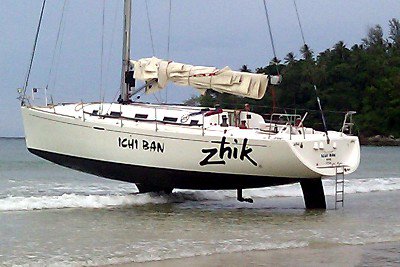 Matt Allen’s 44-foot Ichi Ban, on which he won the IRC 1 class at the Phuket King’s Cup last year, was left standing vertically in the sand after the tide ran out this morning.

“It looks like the boat has not suffered any damage. It is pointing out to sea and should be able to safely sail way at high tide at about 3pm this afternoon,” a regatta organizer at the scene told the Phuket Gazette.

Ichi Ban was one of the many yachts stranded by strong onshore winds during regatta last year. All were recovered safely.

This year’s regatta has drawn a top-flight contingent of King’s Cup stalwarts contending the IRC class, all vying for the accolade King’s Cup champion for 2011.

Arch-rivals Frank Pong and Neil Pryde, both from their home port of Hong Kong, will face off – Pong aboard his Custom 76 JelikII and Pryde on his Welbourne Custom 52 HiFi.

Pong will be looking for payback from two years ago when Pryde won the regatta on HiFi, ahead of Pong in second place racing on Jelik II – both on the same boats they are racing this year.

Missing from the starting lineup, however, is defending champion Ray Roberts and his Evolution Racing crew. Roberts, who won the King’s Cup Racing class last year, is a glaring omission from the Asian yachting circuit this year, as he has taken a year off to tend to business matters.

The Phuket King’s Cup Regatta this year has drawn a record fleet of boats and more than 1,000 sailors from around the world to compete at Kata Beach in Asia’s largest regatta.

With strong representation from ASEAN and a growing number of sailors from China taking part, more than 35 nationalities will race in a diverse fleet of craft, from Olympic classes to kite-boards to the super-high-tech “grand prix” racing boats.

Famed for being Asia’s largest big boat regatta, the King’s Cup was founded in 1987 with a mixed fleet of dinghies, boards and keelboats. Over the years, the regatta has grown to become the jewel in the crown of the Asia yachting circuit, welcoming the best-of-the-best from around Asia and beyond to compete annually in Phuket.

“The Regatta began as a special tribute to His Majesty the King’s Fifth Cycle, or 60th birthday,” said Kevin Whitcraft, President of the Organizing Committee of the Phuket King’s Cup Regatta.

“It has grown to become the most popular and most hotly contested sailing event in Asia. Phuket King’s Cup competitors enjoy champagne sailing conditions, the beautiful Andaman Sea backdrop, a series of exciting race locations and the famous beachfront parties.”

Up to 50 dinghies are expected to take to the start line tomorrow for a three-day series. Joining them on Monday will be more than 100 keel-boats and multihulls, plus for the very first time 20 kiteboards. The total sailing fleet is expected to be over 170 water-going vessels.

The dinghies will race over three days, from tomorrow through Monday, and the keelboats, multihulls and kite-boards will race over five days – on December 5-7, 9 and 10, with Thursday being the reserve day.

For the first time in the Cup’s history, the organizers, together with the Kite-board Tour Asia, have introduced a Kiteboard Class this year. An invitation-only class for 20 kiteboarders, the regatta welcomes pros from the world tour as well as several regional champions, including two-time Asian Champion Narapichit “Yo” Pudla from Thailand.

“Our Quarter Centenary year sees the widest diversity in terms of registered vessels taking part in the Regatta,” explained Whitcraft. “2011 will comprise catamarans, keel-boats, kite-boards, dinghies and international racing boats all competing for honors across racing and cruising categories.

“It is a testament to the extraordinary appeal of this classic race that we see such a broad mix of entrants for the Phuket King’s Cup. The regatta also connects people from across the world, with representatives from every continent taking part,” he added.

Phuket’s Ironman 70.3 brings in the champs