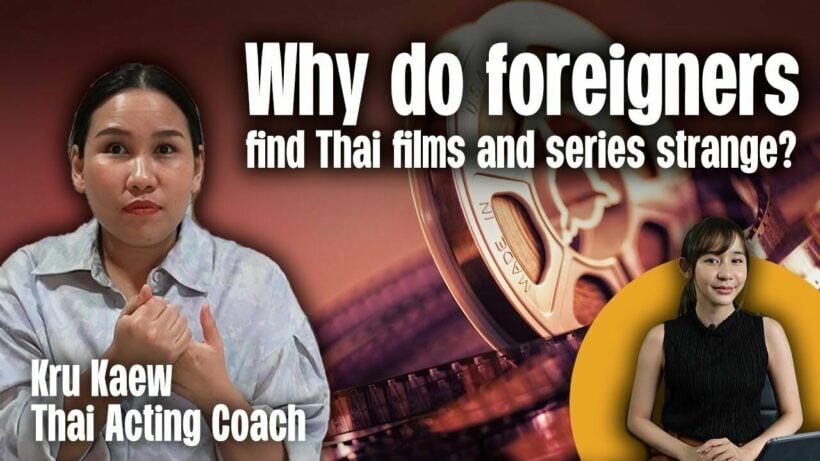 Have you ever watched Thai series, dramas, or movies before? Have you ever wondered why it is so unique? Especially Thai drama? you will find situations quite often repeated such as fight scenes between the leading men, then war between women for the main male character. the main actor or actress will always be rich or the main antagonist will always end up bringing a gun to kill the main characters at the end. I will talk about the Thai film and television industry. Today, I have a wonderful opportunity to interview the most respected acting teacher Kru Lukkeaw Kru Lukkeaw is an acting teacher at The Drama Academy school by Kru Ngor who is a top acting teacher in Thailand. Kru Lukkeaw is also an acting coach. She has coached many actors in a lot of famous films both on TV and film, such as The promises (a Thai movie), The Stranded or Kweng (Thai series on Netflix), and more. She also gives knowledge about acting, how to be a good actor/actress, or ways to succeed in the film as an occupation on her social media. She has around 258 followers on Tiktok and 25,500K followers on Instagram and almost 10k followers on her FB page. So, it is a great opportunity to interview her on the topic regarding the Thai film and television industry!

Q.1: Foreigners always ask “why are all Thai dramas about love, involve fighting or slapping, and are melodramatic?.” The female antagonist’ always wears revealing clothes and is impolite while the main actress has to be calm, neat, and well-mannered. What is your opinion regarding this? And what do you think about this issue?

I understand why they think like that. Are there still these types of Thai dramas? Yes, there are. It might have occurred from Thai culture that slowly developed “Thai drama”. In the past, we developed from “Li-ke” . “LaMekLaKon” Their plots were about “Romance” and “Melodrama”. This Drama was first on the radio and then the TV. and the plot was always the same even in “the novels”. Other countries also have “Melodrama”. However, Hollywood has developed and there is more research behind stories to produce better films. In Thailand, has it developed from the past? I think, for the past 10 years, I have worked in this industry. It has many good plots, a lot more than before. But the old plot lines, involving slapping, still remain. The main Thai channels have run the same plot for a long time. Changing the culture Immediately turns to new plots, if they make something new, it might scare away the viewers, will their viewers watch it?. On the other hand, they do play safe, maintaining the same style of plots that there is already an audience. I think now our industry is at a crossroads … “should we leave behind tradition or should we create some new thing?” Because of new online platforms such as Netflix, Viu, HBO Go (Coming to Thailand soon), Disney+ Hotstar is now available in Thailand More creativity takes place in our film industry.

Q.2: Do you think that Thai dramas or series can be done in more diverse genres, such as investigative series or educating people in very specific fields, such as medicine, agriculture, and be more like other countries’ media?

Now, It is starting to begin, but the research is not as deep or detailed as international films. The reason behind this is “Budget”. It is a lack of funds. Everyone must find the fund for the production cost. Which leads to less research. For example, 1 Korean series production cost can make 10 Thai series. Foreign countries might have a specific research team, and the cost to pay for them. It makes the films more realistic. While in Thailand, our production is rushed and cheap. So, the quality drops. Everyone dreams it will be better and there is some funding from overseas, Netflix supports us. We hope that we can do something challenging. One part is “budget” but the other part is “knowledge” about the subject or the series. In Thailand, some film writers only study “Plot Writing”, but do not understand human psychology or do not do enough research. So, this needs development. “writing skills” along with the “budget” as well.

Q.3 : As you are a part of the Thai entertainment industry, do you think it can grow even more? how it operates, and what dream do you have for the industry?

I truly believe that it can grow even more. Because many Thai people have the capability. Many Thai advertisements succeed and have won many global prizes. Foreigners hire Thai people to do advertisements a lot! But why don’t Thai dramas or series follow them? Because extremely talented people don’t create films for little money. We have the resources. But we need more “time” for the production. “support” regarding skill and the budget. Now, the budgets have increased from the overseas platforms that have paid for us. If Thai policy or the government started to support us, it would make the industry grow faster. Ok!… If we did a series where the Thai government supported us, we could use “the government offices”. Easy contact or free for use, or we could shoot the palace or temple, it would be good and would be Thai “soft power”. [For example] or If there was a scene of “SomTum” (Papaya salad) and the Thai government supported us. When the funding increases, the film industry will move forward.

Q.4: How do you feel about Thai people saying “they don’t watch Thai dramas or series”?

I understand, For me, there are some points that I choose to watch foreign films. Because I know we will get …, we watch for entertainment, we will get more quality from their film. It’s real or there are more beautiful scenes. If there is more funding in production, it will increase the shooting and editing time to make the shot. In One day in the Thai series, there are 12-20 scenes while in the Korean series I heard that it’s only 6 scenes. The question is, how will the quality be the same? Sometimes a scene has not worked yet but we need to move on to the next scene because we need to control the production cost. So, Thai people watch foreign series, they learn something new and find awesome things in foreign films. When they go back to watch Thai series they might think “why the Thais’ quality is not the same as the foreign films’ quality. So, I understand that this could happen. Are there some quality Thai series? a lot more than before. The comedy and Horror genres in Thailand are so cool!! because Thailand has many beliefs. Beliefs about horror. If you have ever seen any Thai horror movies, you will know they are awesome.

Q.5: What do you think about some people who say that “Thai drama” supports “Rape Culture” in Thailand?

I agree I used to be a child that watched Thai drama on TV and It had a “Rape” scene. At that time I had no idea about “having sex” but I recognized that scene and played the role with my cousin (female). I played the role like a man actor in that film. I just did necking which I learnt from a film. In my part, I used to follow the “Rape” action from Thai drama and I realized when I grew up, that this is a “rape” scene. I think the Media influences “humans” a lot. and I work in the media industry. “Media” is so important to set people’s mindset in a country. (In Thailand) The rape scene is in between the roles of the main actor and actress. The main actor raped the main actress but she fell in love with him. “Rape” in the film is not wrong. But the main actor raping the main actress with a happy ending is wrong. Thai people watch this and I even imitated it. However, I think more people are now aware of “Rape culture”. Lastly, I’m currently a part of a Thai series where the original plot is “Y-series” (male-male series). When the first time, the main characters meet each other, the plot is similar to a rape situation. The online platform, where the series will be on air, decided to change that plot. Because the platform thought it shouldn’t have a rape culture in this era anymore. I think it is changing in a good direction for Thailand.

Q.6: What message would you like to say to people in society or the Thai government?

Firstly, my message for the Thai government, I want them to look back and pay attention to the entertainment business in Thailand. If they completely support it, it will go very far and make a huge income for the country. Because It will make tourists want to travel to Thailand, our country has a lot of good things. The culture is outstanding and there are many wonderful tourist attractions. If you truly support the entertainment business, it will go further. Our Thai actors’ are high quality. They are good-looking and so exotic. They have developed their acting skills and they still could develop further than this if they are supported. I want the government to truly see that they have really missed an opportunity to make money. They need to realize it right now. In the part of messages for people in society, I want you to encourage “Thailand”. If you are a foreigner, Thai films will actually be better soon. If you are Thai, it is ok that you don’t watch Thai films. But if some films, when people think that it is good, please try to watch it. If you still don’t watch them, please just hope for us. The working people in the Thai film industry try our best but everything we do really needs the support and encouragement of everyone. So, it will go further with your support. Please support our entertainment business a bit

Soidog
Some great and obvious questions to ask. Followed by the most Meaningless, inane and pointless answers. Perfectly illustrating why all the things wrong with Thai media will remain the same for years to come.

thaifarmer
I could start an enormous rant on this subject. IMO, maybe Thai soaps and media feels outdated, but practically in any country today films, advertising, soaps, talk shows etc. are there for one thing only, and that is to morph…
Ramanathan.P
This is the typical example why there are many rape and molest cases happening in the society. All that is projected in the entertainment industry is accepted as cultural norm. So it becomes part of the society. If there is…