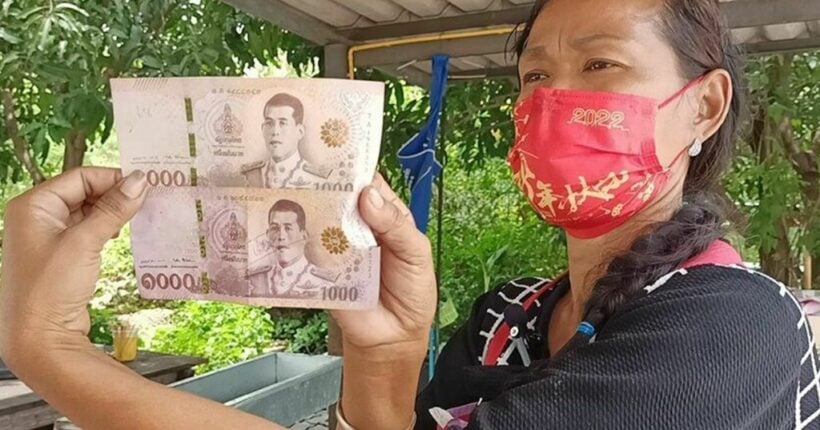 Thai PM Prayut Chan-o-cha is warning about fake 1000 baht banknotes and is urging anyone who finds them to hand them back to any commercial banks nearby. The PM’s spokesperson also gave details about how to detect the counterfeit bills.

Locals in the central province of Nonthaburi have found lots of the fake 1000 baht notes. One female victim told Thai media that she received a fake bill from a female customer. The customer bought a grilled chicken at 190 baht and paid with a 1000 baht bill. She didn’t notice that the texture was different and let the customer go, so she had to pay back the shop owner 1,190 baht and was quite upset over the matter.

She was able to identify the different texture later, and tried putting it in water, noticing that the colour changed. She added that sellers from a local market nearby found more than 30 fake 1000 banknotes.

Today, the PM’s spokesperson, Thanakorn Wangboonkongchana, announced that the PM was already informed about the incident and asked the media to warn residents. Thanakorn also explained 3 ways to notice the counterfeit banknotes.

First, notice the texture…Banknote papers had cotton polymer fibres which were different from other papers and made them more durable.

Second, spot the hidden watermark, which was HM the King’s portrait. The watermark would be revealed when holding it to the bright light.

Third, try tilting or flipping the banknote up and down. If the colour and picture changed in the light, the banknote was genuine.

Why is Thai media so outdated and how can it be improved? | This is Thailand