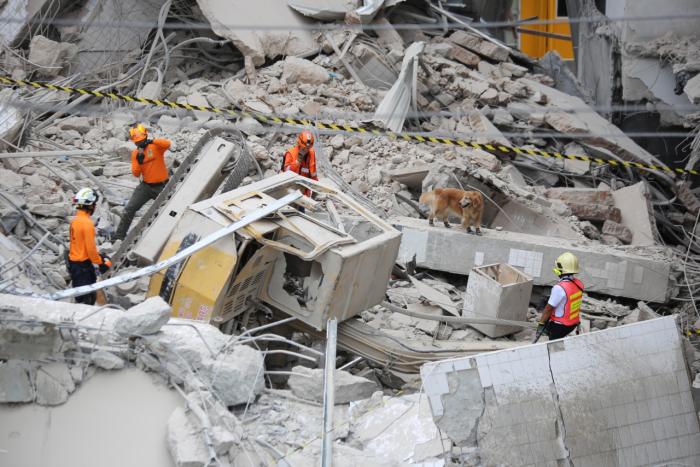 BANGKOK: Two construction workers were killed in Bangkok yesterday when an eight-storey building under demolition on Sukhumvit Soi 87 collapsed.

Rescue workers, police and fire-fighters continue their search for the workers this morning, as they are believed to be trapped under the debris.

It was initially reported that four workers were in the building, said Noppadol Chaipanya, head of the BMA Public Works Control Division.

Backhoe driver Phichit Pasada told police that he and another nine workers were preparing to demolish the building. As he was refilling the backhoe and other workers were checking the building, he heard something like a sling snap before the building collapsed and the workers ran for safety.

The contractor got permission to demolish the building on November 22. However, the Phra Khanong district office ordered a temporary suspension of the demolition on December 2 after officials found hazardous problems at the site.

The authorities have launched a probe into the cause of the collapse, he added.

Students were evacuated yesterday from the nearby Wells International School as a precaution.

The District Office posted a sign ‘Danger: Building collapse’ at the site while the search for the two workers continues, says Deputy Bangkok Governor Jakkaphan Phiew-ngarm.

Jakkaphan said he had spoken with officials from the Engineering Institute and related agencies about parts of the building being cut out to get the workers, feared dead, out of the debris by last night.

Today, engineers and officials will discuss the best method to demolish the building, while the district office will consider declaring the area a disaster zone as a safety precaution for nearby residents’ lives and property.

Metropolitan Police Commissioner Lt-General Sanit Mahathavorn, who inspected the scene yesterday, said a committee had been set up to probe those involved in the demolition and some arrest warrants would be issued accordingly.

He said the incident was within the frame of three offences – recklessness causing the death of others, violating the Building Act 1979, and resisting an official order, because the demolition had been suspended by the district office.