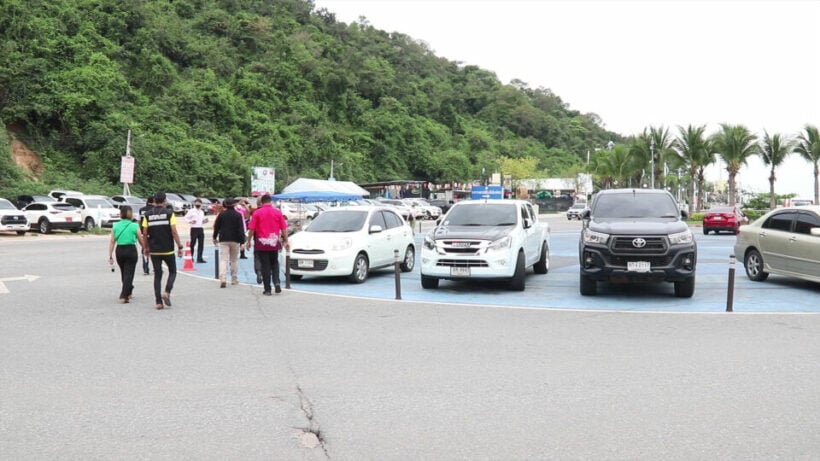 Residents and Thai tourists are again complaining to Pattaya authorities saying that they were charged a parking fee at a ‘free’ public carpark at the Bali Hai Pier. The residents report there was a group of people around the carpark and demanding a fee of 300 baht per day from the drivers. Many tourists, both Thais and foreigners, weren’t aware that the carpark was free.

After a number of official complaints, the Deputy Mayor, Pattana Boonsawat, and municipal police headed to the Bali Hai Pier yesterday. No individuals or groups collecting parking fees from tourists were around when the officials arrived. Pattana met with Thai media and said that the authorities had received complaints via a hotline (1337) that a number of men were asking tourists to pay the fee and “threatening anyone who refused to pay”.

He also said that municipal officers will take a closer watch on the area to prevent any groups or individuals from luring tourists to pay the fee. He insisted the residents and tourists can immediately report via the hotline on 1337, which is open 24/7 if finding similar cases.

Thai media said that it wasn’t the first time this kind of fee scam had happened. Last year, the same issue was reported at Bali Hai Pier and another public park on the road along Pattaya’s foreshore.

Cathat
Probably the jet ski mob branching out while things are quite. I don't think signs with free parking on would work well. They would probably be removed and weighed in.

Guest1
4 hours ago, Grant said: I believe the authorities might be in on this scam? Wait, in Thailand? That can't be!

Soidog
4 hours ago, Grant said: Question: How dumb are the people running the Car Park Operation at the Pier? They say people both Thai and foreigners were unaware it was free? Have they heard of placing large signs at the…
Cathat
since when was anything in pattaya free!
HiuMak
This adds to the notorious reputation Pattaya has. You never know who are actually involved