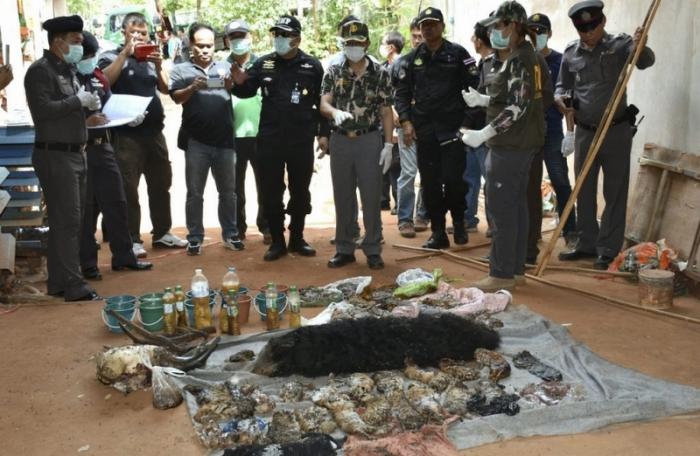 Officials from the National Parks, Wildlife and Plant Conservation Department (NPD) found the frozen cubs while removing 137 tigers from the temple, and relocating them to breeding centers in Ratchaburi Province, near Bangkok.

The dead cubs were frozen together with other dead animals, including a binturong – a protected species also known as a bearcat.

NPD officers said temple staff told them they had kept some dead tiger cubs, the binturong and some tigers’ organs, as well as those of other animals. The officials later questioned staff to find out whether the cub carcasses had any connection with the temple’s live removed tigers, according to NPD Deputy Director Adisorn Noochdumrong.

Yesterday’s discovery of the dead tiger cubs was compounded by reports today of authorities uncovering thousands of amulets made from tiger parts. Officers discovered the artifacts after searching the truck of a Tiger Temple monk and two disciples while they attempted to smuggle the amulets out.

The legal arm of the NPD said they would examine whether the authorities could take any action on the matter, according to Mr Adisorn.

The World Wildlife Fund (WWF) has commended Thai authorities for taking definitive action to permanently remove the tigers from the temple to facilities in Ratchaburi.

“WWF was dismayed last month, when the Tiger Temple was granted an official zoo permit by the NPD,” said WWF Thailand Country Director Yowalak Thiarachow. “This was despite longstanding allegations and ample evidence that the Tiger Temple was trafficking tigers into the illegal wildlife trade.”

“This week’s actions to remove the tigers from the Tiger Temple are long overdue, and we strongly encourage authorities to make the removal of the tigers permanent.”