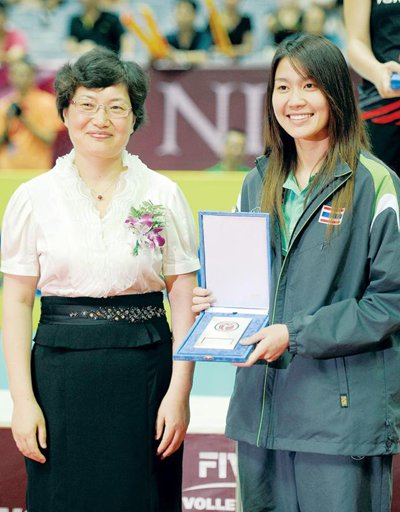 PHUKET: The Thai women’s volleyball team are still on cloud nine after clinching a best-ever finish of fourth in the FIVB World Grand Prix, which ended on Sunday.

It was the first time that Thailand have emerged as one ofthe best team in Asia in any FIVB-sanctioned tournament.

Thailand ended their 2012 World Grand Prix campaign with a bang, stunning three-time Olympic champions Cuba for the fourth time in a row and ensuring that they finished at least fifth in the six-team tournament. In the last match of the day, Asian Games and Asian winners China lost in three sets to world No 1 and defending champions USA to finish fifth and catapult Thailand to fourth.

The USA, unbeaten throughout the whole tournament, underlined their supremacy in the one-month multi-stop event with a hat-trick of victories. The team coached by Hugh McCutcheon claimed US$200,000 (about Bt6.3 million) for their efforts.

Thailand’s fourth place was their best performance in their 10 years’ competing at the World Grand Prix, having made their debut at the annual tournament in 2002. Last year, the Thai squad finished sixth after battling through preliminaries for their first-ever appearance in the Finals.

Winless Cuba came bottom of the standings to claim US$30,000.

There was more good news for the Thai team with Japan’s V-League inviting Onuma Sittirak and Pleumjit Thinkaow to play in their professional league. Meanwhile the Italian Volleyball League is also seeking the services of Onuma and Malika Kanthong as strong receivers.

The spikers arrived back on Monday night to a rousing welcome from a large crowd of fans and reporters waiting at Suvarnabhumi Airport.

The players will gather again in a fortnight’s time to prepare for the AVC Asian Cup in Almaty, Kazakhstan, in September, the qualification tournament for next year’s World Grand Prix. In the meantime, most will compete for their own clubs in the Division A Volleyball Tournament, while four players – Malika Kanthong, Amporn Hyapha, Wanna Buakaew and Pornpun Kerdpraj – will join Thailand’s Saijo Denki team to play in Vietnam.

PHUKET: The government has announced a 67 million baht war chest to prepare 37 athletes from 16 sports for the London Olympics, with taekwondo, boxing and weightlifting seen as Thailand’s top medal prospects.

The budget has been increased slightly since the 2008 Beijing Olympics where 60mn was spent on 51 athletes from 12 disciplines. In Beijing the country won two gold medals, one in weightlifting and the other in boxing, and a silver in taekwondo.

“Our expectations are focused on sports that yielded Thailand medals in past Olympics. But certain disciplines, such as shooting, might spring surprises,’ said Montri, who heads the commission in charge of Thai athletes’ preparation.

The Olympics are set to run from July 27 to August 12, but the first delegation of Thai officials will travel to England on July 12 to set up a training camp in Manchester.

“The time difference is crucial. We are six hours ahead of London … the sooner our athletes adjust to the new environment, the more confident they’ll be,’ said Montri.

“We have been very watchful on this issue, so there should not be any cases [of doping] in the Thai delegation,’ said Thana who has been in the post since the Athens Games of 2004.

The first group of Thai athletes will leave for London on July 23 with the majority following on July 25. Thailand have won at least one gold medal at every Olympics since the 1996 Games in Atlanta.

PHUKET: The Thailand Open will boast the strongest line-up in its history this year with an outstanding international field of golfers from the OneAsia Tour, Europe and Japan.

With Singha Corporation on board as top sponsor, the US$1 million tournament will tee off on August 9 at Suwan Golf and Country Club.

In an exciting development, European Tour stars Paul McGinley of Ireland and Englishmen Chris Wood, David Howell, David Horsey and Richard Finch will all be making their debut in the Thailand Open. Among them they have claimed 12 titles on the European Tour.

Shingo Katayama, Japan’s No 1 player on five occasions and winner of 26 events at home, will be one of the many top Japanese heading to Suwan.

“The Thailand Open will break new ground this year with a truly world class field thanks to the addition of five top players from the European Tour and a wealth of leading Japanese professionals. This is a first for our national Open and I am sure Thailand’s top golfers will rise to the challenge,” said Rungsrid Luxitanonda, on behalf of the Thailand Golf Association.

“Our national open has made remarkable progress since it returned to the golf calendar in 2009 after a brief hiatus. The tournament has emerged as one of the region’s premier National Opens. More star players will be announced in the forthcoming weeks as well as a formidable field from OneAsia,” added Rungsrid.

The event will be broadcast live to more than 400 million homes in more than 40 countries on ESPN Star Sports, SBS Golf Channel, OneWorld Sports, SuperSport and the Golf Network among others. Last year, Stolz triumphed after an enthralling head-to-head battle with Prayad.

PHUKET: Noppon Saengkham, 20 in a week’s time, provided Thailand with a much-needed victory as he won his second of five group matches at the 6 million baht SangSom 6-red World Championship at Bangkok’s Montien Riverside hotel yesterday