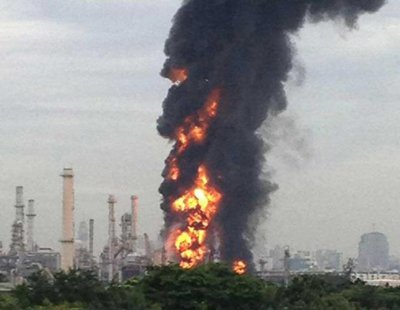 PHUKET: A blaze at the Bangchak oil refinery in Soi Sukhumvit 64, Bangkok, believed to have been caused by a leak in a pipeline, has been brought under control with no injuries reported.

Traffic at the entrance of Soi Sukhumvit 64 is still closed. Bangchak company said in a SMS message that its staff managed to control the fire that broke out at about 7am this morning. The company has shut the whole unit for an investigation, and safety reasons.

Witnesses said they heard an explosion before fire broke out. The explosion shook the area. The scene of the blast was far from any residential buildings so an evacuation order was not issued.

The fire sent a thick column of smoke into the air that could be seen across the Thai capital.

Initial investigations indicate that the blaze was caused by a leak in a gasohol pipeline, and not in an oil tank as was first feared.