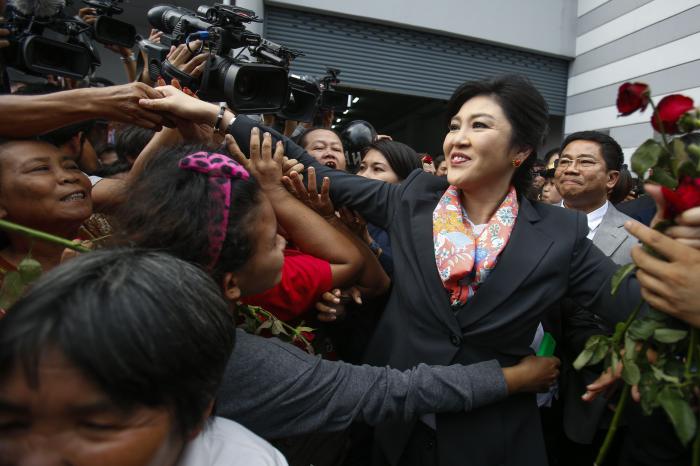 PHUKET: The political deadlock remains steadfast despite former caretaker prime minister Yingluck Shinawatra being dealt a double blow this week, with the Constitutional Court sacking her on Wednesday and the National Anti-Corruption Commission indicting her yesterday – both unanimously.

The legal blows against the government head over the past two days, however, have not created the political vacuum that the anti-government side hoped for. They had eagerly anticipated the entire Cabinet to be thrown out along with its leader by the Constitutional Court.

However, the anti-government People’s Democratic Reform Committee (PDRC), which has been running street protests for six months, appears to believe the removal of Yingluck gives them the long-awaited opportunity to set up a reform administration. “Tomorrow [today] we will take steps towards appointing a new government,” PDRC spokesman Akanat Promphan said.

“After the Constitutional Court’s decision, we decided to move up our schedule. The government has lost legitimacy and any claim it has to govern the country,” he was quoted as saying by Agence France-Presse.

It was not clear what legal basis the PDRC’s vow was based on, but Akanat said the Constitution has an article that may allow the appointment of a new executive body by the Senate.

Anti-government protest leaders have vowed a “final fight” today, without giving details of their plans.

Their pledge came a day after the charter court removed Yingluck from office for abusing her power in transferring National Security Council secretary-general Thawil Pliensri to an inactive post in 2011. The court found that Yingluck and nine other Cabinet members had helped a relative of Yingluck by removing the NSC chief.

The Senate convenes today to elect its speaker. The protesters want a new speaker in place so he can act as Parliament president in nominating a new prime minister.

The judgment was made as scheduled, after the NACC amassed enough evidence to clearly indict Yingluck for allegedly exercising her power in breach of Article 178 of the Constitution concerning the rice price-support scheme, and allegedly intending to employ her power against the government administration regulations under Article 11(1), the NACC said.

“The commission considers there is enough evidence to indict [Yingluck] and refers [the case] to the Senate,” Panthep told a press conference.

The Senate will consider Yingluck’s impeachment. If found guilty, she will be banned from politics for five years.

The anti-graft agency will next investigate to decide whether to pursue criminal action against Yingluck for alleged dereliction of duty under Section 157 of the Criminal Code and negligence under the Commission Act.

NACC member Vicha Mahakun said the commission’s decision was not influenced by the Constitutional Court’s ruling. The guilty judgement was based on witness testimony and documentary evidence, which clearly showed that Yingluck’s alleged negligence while performing her duties had caused the country to suffer huge losses of more than Bt300 billion during the past two years.

The damage was calculated from the market value of rice and the quantity of rice in government stocks after the audit committee finalised the loss figure for the three rounds of the pledging scheme, he said.

Although Yingluck had a chance to correct the mistakes and the rice policy after there were many warnings from other agencies, she refused to halt the project and instead let the losses grow as well as let corruption continue to run rampant, he said.

Meanwhile, the attempt to hold the next election is in a limbo, as the Election Commission told the government that it would be available to discuss the issuing of a Royal Decree next Wednesday.

Charupong Ruangsuwan, leader of the ruling Pheu Thai Party, was pessimistic about the new poll. “I believe there will definitely be no election. They are you-know-who,” he said. “I can’t tell you exactly what will happen if there’s no election.”

The red-shirt supporters of Pheu Thai plan to ask Yingluck to join a mass rally tomorrow on Aksa Road, said Jatuporn Promphan, chairman of the United Front of Democracy against Dictatorship.

Yingluck’s removal is expected to contract the economy this year due to the resulting violence that is likely to break out.

Moody’s Investors Service said the court’s ruling was negative for the country’s sovereign credit rating. The possibility of the absence of a permanent government until the end of the year will slow down new investment in the Kingdom, according to Stanley Kang, chairman of the Joint Foreign Chambers of Commerce in Thailand.

However, the Bank of Thailand believes the economy will not contract and there will not be an economic crisis due to its strong fundamentals.

The four attacks occurred at the Chulabhorn Research Institute, Siam Commercial Bank headquarters, the home of a Constitutional Court judge, and the Defence Ministry.

They occurred in succession, starting at around 9pm, after a Constitutional Court ruling had earlier ended the term of caretaker Prime Minister Yingluck Shinawatra.

He said police had a database of potential suspects, but were not sure whether those behind each individual attack was conducted by the same group of people. Police needed time to gather evidence and intelligence before making a conclusion on who had masterminded the attacks, he added.

In the first attack, two M-79 rounds were fired into the Chulabhorn Research Institute compound, located on Vibhavadi Highway, and also hitting the ninth floor of Chulabhorn Hospital. Along with the building, a parked taxi was also damaged.

Within 30 minutes, a lone M-79 round hit the eighth floor of the Siam Commercial Bank complex. Explosives Ordnance Disposal (EOD) police said it was possibly fired from Ratchadaphisek Road at the front of the building.

He said the EOD was not notified of the attack by local police, who deemed it to be a light, non-lethal attack.

As for research-institute attack, Kamthorn said the M-79 rounds were possibly fired from a moving vehicle at a distance of 180-200 metres.

It will be determined later wheth