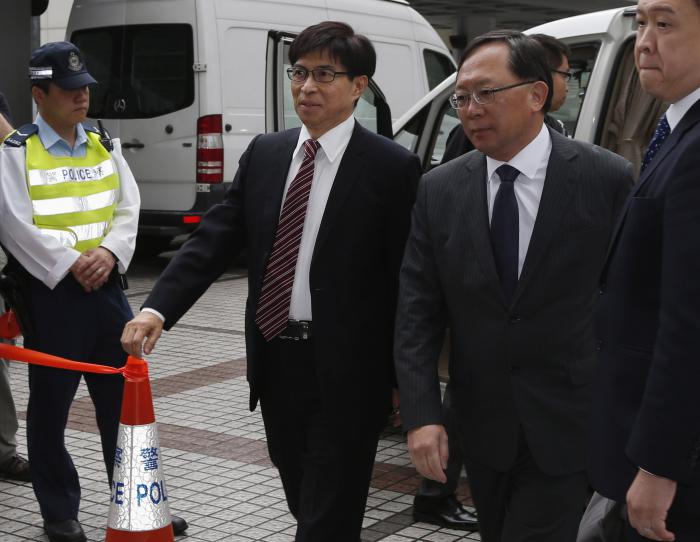 The case involves a series of payments and loans totalling more than HK$35 million ($4.5 million) allegedly paid to Rafael Hui, who had headed Hong Kong’s civil service from 2005 to 2007.

The three men have pleaded not guilty to all charges, including conspiracy to offer an advantage to a public servant.

The case has thrown a spotlight on the close relationship between the city’s powerful developers and government in the former British colony, which returned to Chinese rule in 1997 and has a separate legal system from the mainland.

The Kwok brothers, who run the world’s second-largest property company with a market capitalisation of $34 billion, have been charged with a total of seven offences, including claims related to alleged payments offered to Hui.

Thomas Chan, a board member in charge of land purchases at Sun Hung Kai Properties, and Francis Kwan, a former Hong Kong Stock Exchange official, have also been charged in the case. They have also pleaded not guilty.

All five defendants appeared in court, where about 50 photographers and cameramen jostled to get shots of the men at the entrance.

The prosecution and defendants have hired high-profile lawyers for the trial, with local media reporting the Kwok brothers could spend more than HK$100 million in legal fees, which would mark the most ever paid in the city.

Clare Montgomery, a specialist in criminal and fraud law, is representing Thomas Kwok. She led the prosecution team in the extradition case to Sweden of Julian Assange, founder of whistleblower website WikiLeaks.

Hong Kong’s Court of First Instance will summon more than 80 witnesses during the trial, which is scheduled to run for 70 days, according to local media reports.

The Independent Commission Against Corruption (ICAC) arrested the tycoons in March 2012 in the agency’s biggest investigation since it was set up in 1974 to root out widespread corruption in the then-British colonial government and police.

Sun Hung Kai Properties, which has a market value of $34 billion, has said the legal battle will not affect its business and operations.

Shares in the company were down 0.6 percent on Thursday morning, lagging a 0.6 percent gain for the broader market. The stock has fallen 3.5 percent so far this year.

Analysts have said the company has already taken steps to reassure investors, including the appointment of additional non-executive directors and naming Adam Kwok and Edward Kwok, the sons of Thomas and Raymond Kwok, as alternative directors.