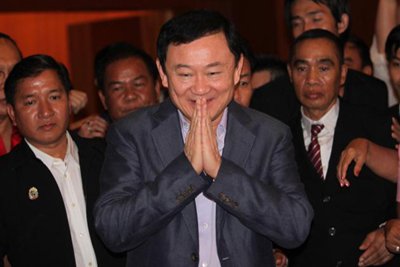 Politics not involved in visa given to Thaksin : US ambassador
Phuket Gazette / The Nation
PHUKET: The issuing of a visa to former prime minister Thaksin Shinawatra was done under United States laws and had no bearing on domestic politics in Thailand, US Ambassador Kristie Kenney said yesterday.

Commenting on Thaksin’s ongoing visit to the US, Kenney said every year some 50,000 Thai citizens receive visas granted in strict compliance with existing laws and regulations.

She said the US was honored to have bilateral cooperation with Thailand on extradition and criminal assistance. She noted that the US had always responded to Thai government requests made under the two legal agreements, hinting that there had been no extradition request in Thaksin’s case.

She ruled out any adverse implications, saying the visa granted to Thaksin was not a political issue.

In a related development, Democrat MP Thepthai Senapong said protests by Thai expatriates were proof that Thaksin’s visit to the US was not smooth, as had been claimed by his legal adviser Noppadon Pattama.

“I view the protests as a snub intended for the government because Thaksin is a fugitive but the authorities have neglected to bring him back to serve his jail term,” he said.

Thepthai said the Ministry of Foreign Affairs, the Office of the Attorney-General and the Royal Thai Police had collectively failed to do their job by not issuing an extradition request for Thaksin.

“Thaksin is not staying in the US for just one or two days, therefore it is inexcusable for not knowing his address,” he said in reference to an alert about his whereabouts – so US authorities can arrest the fugitive PM and send him back.

In related news multi-colored shirt group leader Tul Sithisomwong led some 25 protesters in a rally in front of the US Embassy to voice opposition to Thaksin being allowed to enter the US. Tul said he wanted an explanation for why the US allowed the fugitive Thaksin to enter despite signing an extradition treaty in 1990.