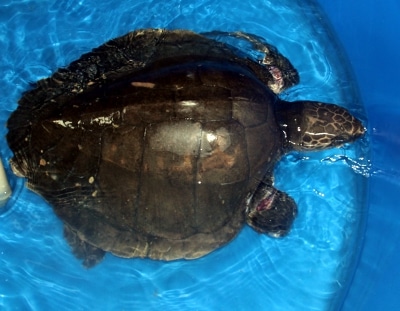 PHUKET: The Phuket Marine Biological Center (PMBC) has put the dumping of used oil into the sea back to the top of their agenda after two oil-stained sea turtles found their way to shore during the last two months.

Kongkiat Kittiwattanawong, head of the PMBC’s Endangered Species Unit, has called on all relative organizations to step up their efforts on identifying the source of the oil and put a stop to it being dumped.

“After ending up in the water, the oil spreads and prevents sunlight from penetrating the water’s surface. This factor alone has a significant, negative impact on the marine ecosystem,” Mr Kongkiat said.

Within the past two months alone, PMBC officers have rescued two Pacific Ridley turtles that landed on shore in Phuket and Phang Nga, he said.

Not only were the turtles suffering from cuts and wounds from fishing nets, but also were covered in a thick layer of oil.

“The oil covered the animals entire body and was in their mouths and covering their gums,” explained he explained.

Mr Kongkiat has called on fishermen to cooperate with his offices’ efforts to preserve the marine environment and stop pouring used engine oil into the ocean.

The renewed efforts of the PMBC comes in the wake of a large oil spill off the coast of Krabi early last month and the recent oil staining of one kilometer of Lo Dalam Beach on Koh Phi Phi.