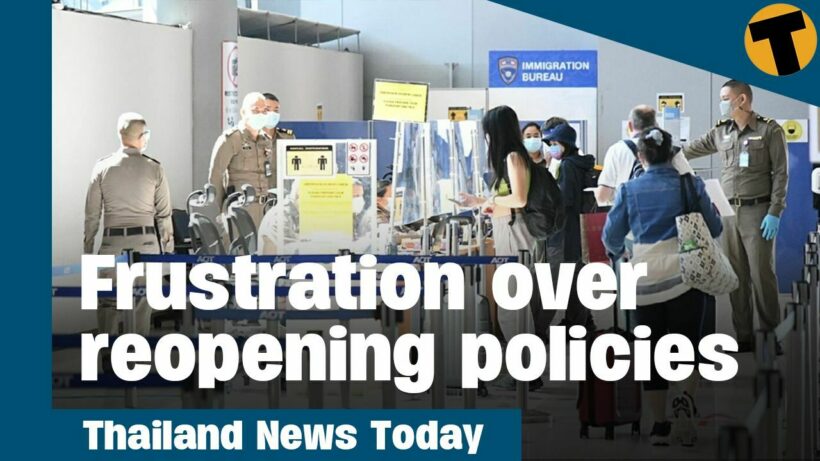 Thailand’s Test & Go entry scheme re-opens for registration today and has been given a cautious welcome by tourism operators.

Businesses are unsure about the additional rules of Test & Go “Version 2”, including the requirement for an additional PCR test on day 5, which involves a second mandatory hotel stay until a negative result is obtained. This is despite the fact that on days 2 to 4, travelers are free to wander where they like after receiving a negative result on day 1.

The tourism sector has expressed frustration at the number of steps operators have to go through in order to comply with the latest orders from the CCSA. ธเนศ ศุ-ภร-สะ-หะ-รังสี from Chon Buri Tourism Council says that allowing each province to introduce its own additional disease prevention measures is confusing for both tourism businesses and international tourists.

He said besides on-and-off reopening over the past few months, there are always inconsistencies in our regulations. For example, even though the CCSA lifted the alcohol ban in restaurants for blue zone provinces late last year, provincial governors and communicable disease committees can have different orders based on each situation.

Thanet also points to the efforts Chon Buri officials had to go to in order to be included in the sandbox scheme once the government shut down Test & Go in late December, as opposed to Phuket, which was permitted to be the sole operator of the sandbox entry scheme for a brief period, a decision that left other provinces frustrated and mystified.

And by the time the government relented allowing Chon Buri and other provinces to return to a sandbox model, the return of Test & Go was back on the table and the efforts of the preceding weeks to restore sandbox status were largely a waste of time.

Meanwhile, the head of the Hua Hin sandbox scheme and president of the Thai Spa Association has also expressed exasperation at the government’s back-and-forth approach to re-opening.

He said “The government should not twist and turn the re-opening programme once again. If we want to make Covid endemic, we should start learning to live with it now.”

Deadline to apply for "Covid" visa extension extended by 2 months

Authorities are warning the public that Thailand’s face mask mandate is still in effect with a maximum fine of 20,000 baht.

The CCSA made a post on Facebook, reminding the public of the range of fines for those who do not wear a cloth or medical face mask.

The nationwide mask mandate was published in the Royal Gazette back in June 2021. According to the official order in the Gazette, the face mask mandate will end only if the Covid situation in the country gets better or the Emergency Decree is canceled. The decree has been extended several times since it was put in place at the start of the pandemic in March of 2020. It gives the government sweeping powers, through the establishment of the CCSA, to set measures and restrictions to combat the pandemic.

The Public Health Ministry has approved China’s Sinovac vaccine for use in children between the ages of 3 and 17.

โอภาส การย์กวินพงศ์ from the Department of Disease Control said a ministry sub-committee made the decision on Friday, but added that parental consent will still be required before children can be vaccinated. In addition, the use of Sinovac in young children will also require the approval of Thailand’s FDA. Opas says once that approval has been secured, inoculation can begin straight away.

Opas referred to a number of studies that have shown the use of Sinovac to be safe in children and adolescents. Last December, the FDA approved the use of the Pfizer mRNA vaccine for children between the ages of 5 and 11.

Health minister Anutin Charnvirakul has welcomed the Sinovac decision, saying it gives parents more choice in what vaccine their child should have. He went on to say that Thailand now has a variety of different types of Covid vaccines and that people yet to be vaccinated should come forward as soon as possible. Anutin added that acquiring a degree of immunity through vaccination was safer than doing so through infection.

Yesterday, Covid vaccination for children aged 5 – 11 kicked off at the Queen Sirikit National Institute of Child Health in Bangkok. The children were given the Pfizer mRNA vaccine.

In related news, Opas says the health ministry’s sub-committee has also approved the use of AstraZeneca as a booster dose for people who’ve already received 2 doses of AstraZeneca. The decision was taken after a UK study showed that protection against severe illness or death from was significantly improved after 3 doses of AstraZeneca.

The Thai government plans to make lower-cost antigen test kits available to the general public through pharmacies and hospitals.

According to CCSA spokesman, ทวีศิลป์ วิษณุโยธิน, the Prime Minister wants around 20 million kits a month distributed across the country, allowing people easier access to proof of being infected.

While the PM has welcomed Thailand’s low death toll from the Omicron variant, Taweesilp says he remains cautious, pointing out that the infection rate has not yet stabilized and in fact, is likely to rise. He says people must continue to adhere to disease prevention measures, such as mask-wearing in public, regular hand-washing, and social distancing.

His warning comes as a number of Covid clusters are reported across the country, linked to either restaurants, entertainment venues, hospitals, or schools.

After a solid win for the Pheu Thai Party in Sunday’s Bangkok by-elections, the party’s leader has called on the Thai PM to dissolve parliament and hold a snap election.

He says the best course of action available to the PM now is to dissolve parliament, adding that doing so is nothing to be ashamed of. ชลน่าน says the by-election result is proof that the Thai people have had enough and now want political change and full democracy. He has already vowed that the Pheu Thai Party will work harder to ensure a landslide victory in the next general election, after which it will form a new government and get to work for the people.

In Sunday’s by-election, the Pheu Thai Party was confirmed victorious after votes from 265 polling units, out of a total of 280, had been counted. This amounted to nearly 95% of the votes.

A year ago today, Myanmar’s military seized power of the government over what they say was a fraudulent election.

The democratically elected State Counsellor Aung San Suu Kyi was ousted and detained, as well as other civilian leaders. The coup was met with backlash from the public, leading to a bloody crackdown by security forces that killed more than a thousand people. A number of journalists, students, artists, activists, civil workers, and lawmakers were arrested for defying the military junta.

A total of 11,838 people are currently in detention and the activist group says that includes two children who have even been sentenced to death.

As today marks the first anniversary of the coup, activists have called for a “silent strike,” with citizens staying at home between 10am and 4pm. Toward the end of the strike, people will clap or smash pots, a traditional act to drive out evil spirits which is frequently used as a form of protest against the military.

However, in an attempt to quell any protests on this yearly day, the military junta has threatened sedition charges on individuals who close their businesses or even clap and bang pots.