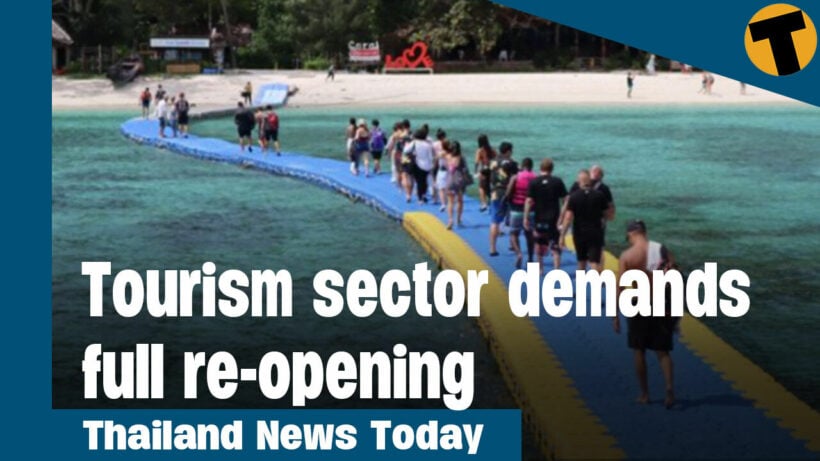 Tourism businesses in Thailand are struggling to survive and barriers to increasing the number of foreign visitors to the kingdom must be removed immediately. That’s the view of Chamnan Srisawat from the Tourism Council of Thailand, who says the Omicron variant, coupled with Russia’s war on Ukraine, has dealt a double blow to the sector.

A TCT poll that surveyed 200 overseas travellers found that 71% agreed the process around the PCR test on arrival is cumbersome.

Chamnan says if Thailand’s tourism industry is to survive, it needs to retain 40% of its 2019 level of business this year. That’s 1.2 trillion baht in revenue, from 16 million tourists and 75 million domestic trips. He adds that in order to achieve this, the onerous Thailand Pass registration process and PCR testing on arrival need to go as soon as possible.

740 tourism operators participated in the survey and its findings show that confidence is lowest among nightlife operators, who have been the most severely affected by Covid restrictions. The confidence level among those businesses is at 20, down from 41 during the same period in 2021.

According to Chamnan, 78% of tourism operators are struggling to increase their revenue, with 45% reporting a decrease and 33% only just managing to maintain the same level of income as during the last quarter of 2021. Entertainment venues were the worst affected, with around 44% planning to lay off workers in the second quarter of this year. They were followed by spa businesses, massage parlours, and tour operators.

And here comes the other side, Public Health Minister Anutin Charnvirakul, said before attending a meeting with Bangkok’s disease control meeting today, that operators on Bangkok’s Khao San Road should forget about holding water-splashing events this Songkran.

This looks set to be the third Songkran in a row during which water splashing is banned, with the government ever-wary of triggering another Covid wave.

The capital’s communicable disease control committee meets later today to decide if businesses will be given the go-ahead to hold water-splashing events during the Thai New Year holiday. The CCSA previously banned such activities, but operators on Khao San Road, along with businesses in Chiang Mai, Pattaya, and Phuket, have submitted a joint petition urging officials to reconsider.

According to a report, สง่า เรืองวัฒนกูล from the Association of Business Operators on Khao San Road, says people celebrating Songkran in the capital are likely to spend between 50 and 80 million baht during the 4-day holiday if water-splashing events are given the green light. However, Anutin insists such activities are still too risky, calling on businesses to be patient…for another year he says.

Sutat from the Institute of Urban Disease Control and Prevention agrees, saying water splashing is unlikely to be allowed and that group gatherings are still not recommended. But he did say the committee is likely to announce the easing of more restrictions, including alcohol consumption in SHA+ venues.

The Public Health Ministry has revised the formula for the administration of Covid-19 booster vaccine doses.

The confirmation follows chatter on social media that the ministry had changed the criteria, prompting Thailand’s Anti-Fake News Centre to investigate and confirm it was true. According to the Nation Thailand report, the new criteria for getting a third or fourth booster dose is as follows:

Young people between the ages of 12 and 17 should receive a full dose of Pfizer, or another mRNA vaccine, as their third dose, which should be administered between 4 and 6 months after the second dose.

Those who’ve recovered from a Covid-19 infection should wait 3 months before receiving a booster dose.

Meanwhile, the Public Health Ministry says that while 2 vaccine doses will not necessarily protect someone from becoming infected with the Omicron variant, it significantly decreases their chances of dying from the virus. A third dose can protect against infection in around 45 to 68% of patients and against death in 98%. A fourth dose can protect against infection in 82% of people.

The ministry is urging people who have not done so to get a third vaccine dose, as officials ramp up efforts to administer booster doses to 70% of the elderly population ahead of the Songkran holiday next month.

An investigation is being launched into why there have been 2 oil tanker explosions in Bangkok in the space of a month. The Transport Ministry has instructed the Marine Department to launch a probe into the explosions, the latest of which occurred this past Sunday.

The Ampar 8 was carrying over 3 million litres of crude oil from the island of สีชัง in Chon Buri, and attempting to moor at Bangkok’s Chao Phraya River, when the explosion occurred. One crew member was killed and 3 others were injured.

Deputy Transport Minister Athirat Rattanaseth confirmed there was no oil leak into the river, adding that once the fire in the anchor room was brought under control, investigators would go on board. Meanwhile, the pier has been sealed off for now.

Earlier this month, another oil tanker exploded while at a pier in the Phra Pradaeng district of Samut Prakan. The March 9 explosion on the Smooth Sea II also killed 1 crew member and injured 3 others.

A 67-year-old grandma in Thailand’s Isaan region, known for catching large snakes with her bare hands, has been praised by Surin residents as the top “community rescuer” after she caught her biggest python so far.

When someone in the community finds a snake, they come to grandma Prakuad Pasomsi to catch it.

Grandma has been catching snakes with her bare hands for the past three years. She usually catches non-venomous snakes and contacts a rescue team to pick them up and release them in a more suitable place. She says she isn’t scared of snakes. She’s been bitten two times but says it didn’t hurt much.

She says her neighbours come to her when they find a snake and she’s always willing to help and never asks for money in return. The neighbours usually call her the “community rescuer.”

Flash flooding from heavy rainfall is expected over the weekend in eight provinces in Southern Thailand.

The Department of Disaster Prevention and Mitigation has announced a flash flood warning from April 2 to 4 in Chumphon, Surat Thani, Nakhon Si Thammarat, Phatthalung, Songkhla, Pattani, Yala, and Narathiwat.

The situation is likely to be severe in some areas and the department is asking people situated in these eight provinces to closely monitor the weather forecast, watch out for announcements and strictly follow any instructions given.

A low-pressure cell covering the Southern coast of Vietnam will move over to Southern Thailand and Malaysia and is expected to cause heavy rain, heavy water runoff, and flash flooding.

The department is coordinating with local organisations to assign personnel, vehicles, and rescue equipment to help people in risky areas.

If you are in a dangerous situation due to the weather and need help, you can contact the department via the Line ID @1784DDPM.