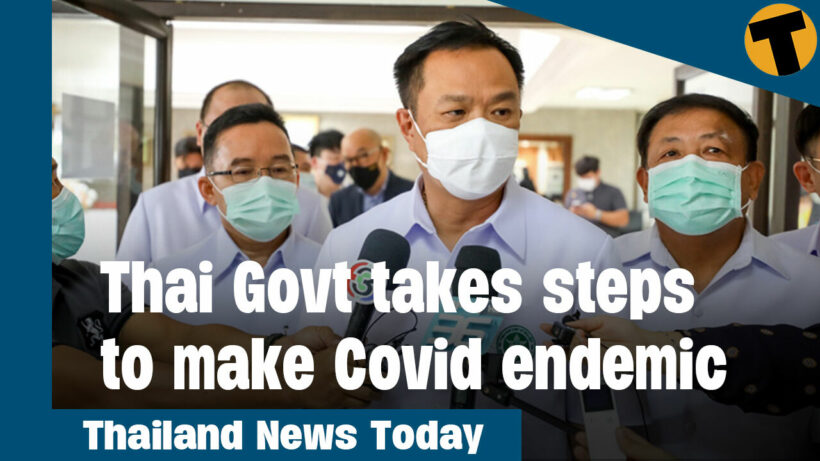 Despite calls to delay removing Covid-19 treatment from the Universal Coverage for Emergency Patients scheme, Thailand’s health minister is pushing ahead as part of the government’s policy to downgrade the virus to endemic.

Anutin Chanvirakul was responding to calls from a number of quarters, including his deputy, Sathit, who asked him to postpone the removal until April due to the surge in infections in recent days.

The UCEP scheme currently allows Covid patients to be treated for free at any hospital for 3 days, before being transferred to the hospital they’re registered at under their welfare scheme. However, from March 1, Covid will no longer be classified as one of the conditions covered by the scheme.

Anutin has rejected suggestions that the change in policy will negatively affect Covid patients and says it’s in line with a government policy which aims to declare Covid-19 as endemic by the end of the year.

New infections have surged past the 10,000 a day mark since earlier this month. However, the CCSA predicts that overall cases will begin to level off and start dropping this week.

Bangkok reported around 2,800 cases and 10 deaths, with daily infections doubling during the first 6 weeks of the year.

The CCSA says it is closely monitoring 10 provinces that have not reported any significant rise in infections, meaning that for them, the surge could still be on its way. The provinces are Khon Kaen, Chiang Mai, Pathum Thani, Maha Sarakham, Rayong, Roi Et, but Chachoengsao, Suphan Buri, Saraburi, and Phetchaburi.

“All of them had underlying illnesses. 14 were unvaccinated. 2 had received 1 vaccine dose. 2 others had their second dose more than 4 months ago. 2 had already received their third dose but had not reached the time when their immunity would peak yet.”

She went on to say the outlook for the country remains positive and the infection rate is expected to stabilise and begin dropping this week. She has warned against complacency, however, pointing out that many provinces are battling a surge in cases, with 80% of infections caused by the Omicron variant and 20% being Delta. Apisamai has expressed concern that the number of patients in need of respirators is expected to rise.

A spike in daily new infections, coupled with high prices for goods and services, has hampered the recovery of domestic tourism.

La-ead from the northern chapter of the Thai Hotels Association says despite government schemes such as We Travel Together and other incentives designed to attract visitors, bookings from the fourth phase of the stimulus have yet to pick up as expected due to Omicron concerns.”

During the first week of the phase 4 campaign, We Travel Together campaign, only 300,000 room nights were used.

La-Iad says that, while hotel operators had hoped that January and February occupancy would remain at 55%, the Omicron-driven surge in cases in January meant occupancy plummeted to less than 20%. Things are not looking any better for the north during February, despite Chiang Mai holding its annual flower festival. Passenger numbers at Chiang Mai airport have dropped from the 7,000 – 8,000 a day seen towards the end of last year to 4,000 – 5,000 on February 1st.

Meanwhile, in the west of the country, THA’s Wasan says rising infections and reduced purchasing power means hotel occupancy in the tourist district of Cha-am, in the province of Phetchaburi, is likely to fall below 50% this month. The province will hold its annual art and culture fair later this month but there is no clear indication yet of visitor numbers as Thai travellers prefer to decide at the last minute.

However, Wasan remains hopeful that hotel bookings will pick up in March and April if families use the long holiday periods to avail of the government’s stimulus campaign.

Four Thai tourists were injured when the railing of a pier broke and they fell onto the rocks two metres below.

The tourists were taking a photo and leaning against the railing of the pier on Koh Larn island off the Pattaya coast when it broke. Three of them are being treated for serious injuries.

Thai media says those in serious conditions were confused after the fall. One of them had a stroke and another suffered a serious head injury. The authorities visited all of the patients to offer compensation of 5,000 baht for each, but one relative shared that the money was not enough. She says her aunt is in the most severe condition and she wants all relevant departments to take care of the case and find solutions to prevent similar cases in the future.

The wooden pier at the island’s Sangwan Beach is now being repaired and Pattaya officials have closed off the area. Reports say officers will visit the bridge every day to recheck and make sure the structure is safe before reopening the pier to travellers.

A four-month-old baby was found in the middle of a road in the eastern province Sa Kaeo, which borders Cambodia. Reports say the mother was drunk and accidentally dropped her baby while on a motorbike, but did not realise until she had driven home.

Locals found the baby lying in the middle of the Suwannasorn Road at around 9 pm Sunday and sent the child to the hospital. Reports say the baby had a mild head injury. At around midnight, the mother contacted emergency responders. Thai media says the woman admitted to being intoxicated and was somehow driving a motorbike while holding the baby. She says she did not realise the baby was gone until she was home.

The baby is still in a hospital getting treatment for the wound on his head and some scratches on his body. Many Thais on social media are sharing their opinions on this story, complaining, of course, about the recklessness of the mother.

Men are flocking to a barbershop in Chon Buri after the nephew of the Sultan of Brunei came in for a haircut.

Faiq Jefri Bolkiah, who is also a professional footballer, recently started playing for the Chon Buri Football Club and has become very popular among Thais.

The owner of Chang Tee Barbershop says many people have been interested in coming into the shop after Faiq’s haircut, adding that it’s a good opportunity for his business to recover after losses brought on by the pandemic.

The barbershop owner says many clients are now interested in a cut similar to Faiq… a clean skin fade, from a zero to number two clipper guard. A skin fade is now the most popular haircut at the shop.

The 28-year-old barber who cut Faiq’s hair says many of his clients are from the football club. So when Faiq needed a haircut, they recommended him. On his Facebook page, he posted a photo of the haircut with the caption “Sit back and chill, your highness. I will get you the perfect look.”
As for me, I’ll keep my barber as a trade secret

PapayaBokBok
CCSA predicts that overall cases will begin to level off and start dropping this week. Why not just get the FACTS, and go as the thai fortune teller?????.......as per thai logic
Dmitrii
Looks like the domestic tourism fails to replace the international 😉