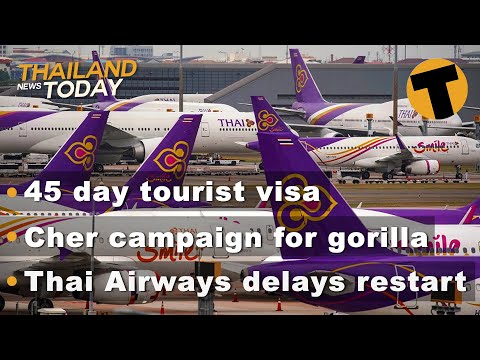 Last day of the week and the middle of the long of a 4 day long weekend for Thailand. Be safe on the roads and we’ll see you on Monday. All the latest news will continue on thethaiger.com.

45 day tourist visa exemption proposal to be presented to Cabinet

After the prime minister told officials to hurry up and relax restrictions for foreigners entering Thailand, the recent proposal to extend the on-arrival visa exemption for tourists from 30 to 45 days is quickly moving forward and will be presented to the Cabinet next week.

The 15 days added on to the visa exemption is intended to make up for the 2 week quarantine required for those entering the country. Officials hope the scheme will lure in more foreign visitors.

At the moment, foreign tourists can only enter Thailand under the pre-issued 60 day tourist visa or the new Special Tourist Visa, which is allows a 90 day stay that can be extended twice, adding up to around 9 months.

Foreigners can also re-enter Thailand under a handful of existing visas. As usual we’d urge anyone thinking of visiting Thailand at this time to contact their local embassy… we understand there’s been a lot of difficulty at this time and can only suggest that you persist.

Thai Airways flights to Phuket and Chiang Mai were supposed to start back up on Christmas day, but the recent Covid-19 local transmissions have led the airline to push the relaunch date back.

Now the Thai Airways flights from Bangkok will take off on January 1, but if the virus continues to be an issue in the north, the airline might decide to delay the flights again.

At least 17 Thais tested positive for Covid-19 after illegally entering Thailand from Myanmar’s border district Tachileik. They evaded the mandatory quarantine and some travelled to Bangkok, Chiang Mai and other provinces before testing positive.

Things haven’t been easy for Thai Airways this year. Along with being buried in a debt of nearly 300 billion baht, more than 20 people are currently under investigation for being involved in systemic corruption and mismanagement at the airline.

Pro-democracy protesters gathered in front of the United Nations building in Bangkok yesterday, calling on the organisation to step in after many activists were recently arrested for allegedly violating Thailand’s controversial lèse majesté law.

The law carries prison sentences from 3 to 15 years for insulting or defamatory statements about the Thai Monarchy. Activists say the law violates human rights. Yesterday was Constitution Day in Thailand… the current constitution just one of the things the protesters are rallying for change.

After a large-scale manhunt, police and military investigators arrested 4 men for their alleged involvement in the murder of a police officer in the southern province Pattani.

The police officer was riding his motorcycle when he was shot by a pillion rider on another bike. The rider, dressed in women’s clothes and wearing a headscarf, pulled out a M16 assault rifle. When the officer fell, the attacker got off their bike and shot the officer point blank with a 9mm handgun before stealing the officer’s pistol and fleeing the scene.

Police used surveillance camera footage in the area to track down the suspects.

US singer Cher has taken to Twitter to expose the plight of a Thai gorilla known as Bua Noi, who has lived above a shopping mall in Bangkok for 30 years.

With her mate having died several years ago, she is Thailand’s only gorilla.

Bua Noi living at the Pata Zoo, on the top floor of a Bangkok shop mall, has captured the singer’s attention. The zoo has been in operation since the late 1980s and is home to various species of monkey, reptiles and birds, over 2 floors. It has been condemned by animal welfare activists and others as completely unfit for purpose.

The Kata Rocks Superyacht Rendezvous is back again this year, even though much of Phuket has been wiped out from the lack of tourists. The event, held at the Kata Rocks resort on the headland at Kata Beach, was still able to attract some of the region’s biggest boats for the invitation only event.

It’s open to both sailing and motor yachts measuring over 24 meters in length, visiting or based in Phuket and is part of the larger project to promote Phuket as a destination for visiting super yachts and crews throughout the year to enjoy the island, its marinas and the magnificent scenery around the Andaman Sea coastline.

The event kicked off yesterday and runs through to the end of tomorrow.