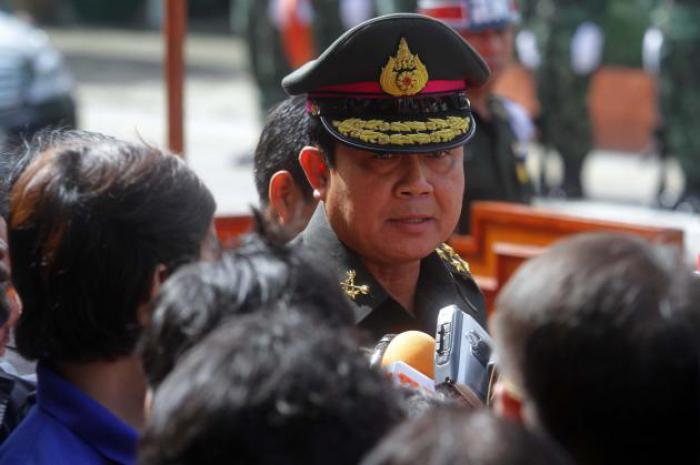 “There are several groups that talk about violence. You know which groups I am referring to. We need to look back and see what is causing the problem. If you can resolve the symptoms but not the cause, then you cannot end this crisis,” he said.

Prayuth also called on all sides to refrain from issuing threats or making remarks that might deepen the current impasse, adding that it would take time to remove the root cause of the problems faced by Thailand.

“As long as the conditions from which the conflicts originate remain, we cannot move forward. Don’t depend on the military to find a way out because we have to do our job of maintaining security,” he said.

Prayuth also threatened to file lawsuits against newspapers that published reports accusing him of not doing anything.

“I will take legal action against some papers that have published reports accusing me of doing nothing because I have allegedly accepted some interests. Nobody can ‘buy’ the military. We will not change no matter what is offered to us. Nobody wants so much power that one has to accept all sorts of offers.’ he said.

He also warned different groups to refrain from widening ongoing conflicts, pointing out that respected senior figures had good intentions for the country, but were misunderstood due to miscommunication. “Look at their intention – whether they achieve their purpose depends very much on the mechanisms in place. There are legal and Constitution-related obstacles,” he pointed out.

Prayuth was referring to retired supreme commander Gen Saiyud Kerdphol’s announcment on Saturday that Privy Council President General Prem Tinsulanonda had accepted his group’s plan to seek help from His Majesty to end the political crisis. Prem later had his aide deny this report, saying Saiyud had misunderstood the elder statesman.

Separately, Prayuth said he had informed the Centre for Administration of Peace and Order to look into allegations that former supreme commander General Chaiyasith Shinawatra had established a militia and was behind armed personnel being trained in Nakhon Ratchasima. “I am getting the Internal Security Operation Commands monitor and report to me about what kind of training is being done,” Prayuth said.

However, Chaiyasith has flatly denied the allegation, saying he had gone to Si Sa Ket province in the Northeast to visit old military colleagues.

Prayuth also said he would speak to the Centre for the Administration of Peace and Order about its plan to adjust security measures for the capital by replacing soldiers with police.

“We have to find out if the police can ensure public safety without our support. I have no problems in working with anyone, I just want the country to be safe and sound,’ Prayuth said.

PHUKET: The Centre for the Administration of Peace and Order (CAPO) will adjust the deployment of troops to provide security in Bangkok by replacing soldiers with police, the caretaker deputy premier said on Tuesday.

Surapong Tovichakchaikul, as CAPO chief adviser, said that once the caretaker cabinet approved extending enforcement of the Internal Security Act (ISA) for another 61 days until June 30, the number of the military would be reduced while police would be increased.

There were currently 58 companies of soldiers deployed in Bangkok and adjacent provinces for security, he said, but now the police will assume wider responsibility More details will follow in one to three days, he said. The adjustment is designed to ensure more effective law enforcement. The Army will remain in place at Government House.

The change is in part a result of the easing situation, with the number of protesters shrinking and the progovernment United Front of Democracy against Dictatorship (UDD) announcing they would not confront rival groups, Surapong said.

PHUKET: The Election Commission (EC) yesterday agreed to take into consideration the proposal of Democrat party leader Abhisit Vejjajiva to reform the electoral process before holding an election. However, both sides remain concerned whether an election could be held while the political impasse continues.

EC secretary-general Puchong Nutrawong said Abhisit had proposed eight points to the EC about how to reform the election mechanism to hold a fair, smooth, and peaceful poll in order to convince voters to cast their ballots.

Abhisit’s proposal was in line with that of EC commissioner Somchai Srisutthiyakorn, who is in charge of election management, Puchong said.

“We agree that we have to review election regulations or announcements, which have been proposed by Somchai as well,” Puchong said.

The eight proposals have not been revealed to the public though the EC said it would consider them.

According to Puchong, Abhisit has proposed that the EC issue regulations to penalise politicians or parties who fail to deliver policies promised in their election campaign. For example, their electoral rights could be revoked if they failed to deliver, he said.

Abhisit has proposed that the EC consider issuing yellow or red cards to candidates within 30 days after the election day, instead of within one year according to the current law. Otherwise it would be difficult to take legal actions against them when they had already taken a political post for a while, he said.

Abhisit said the EC would pass on his proposals to the caretaker government when the EC was scheduled to meet Prime Minister Yingluck Shinawatra today.

“I want to make a plea to the premier to consider my initiative and not rush into holding an early election without having a solution on how to reform the country,” he urged.

“The EC and I agree that the current atmosphere makes it difficult for the EC to hold a complete election. Although the EC thinks they can hold a lawful election, there is also concern if the House of Representatives could be convened for its meeting,” Abhisit said. “If we can’t find a common ground [between the stakeholders before holding an election] the country will remain in stalemate. An election will create more problems. People would rather accept a poll delay,” he said.

Asked if his party members would contest the next election if others agreed with Abhisit’s proposal, he said he has to make his party accept it, too. Abhisit said he would conclude his proposals and reveal them to the public by this week. Before the meeting, Supachai said he personally believed Abhisit’s move could possibly break the impasse and lead to a smooth election.
< — Phuket Gazette Editors