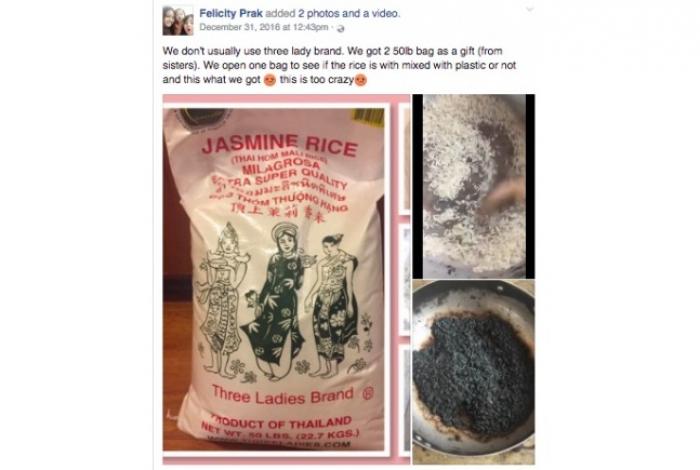 PHUKET: Thai government officials yesterday denied allegations by a Facebook user from the United States who last week claimed that when she cooked rice imported from Thailand, she realized it contained plastic.

The user, named as Felicity Prak, posted two photos and one video, showing the rice getting stuck to the pan and getting burnt. The post has received more than 3.5 million views and 72,000 reactions, and has been shared over 15,000 times.

The post reads: “We don’t usually use three lady brand. We got two 50lb bag [sic] as a gift. We open one bag to see if the rice is mixed with plastic or not, and this is what we got [sic]. This is too crazy.”

Duangporn Rodphaya, Director General of Thailand’s Department of International Trade, assured reporters that rice exports from Thailand were not fake.

“I confirm that Thai rice and Thai jasmine rice from this well-recognized brand (Three Ladies) is of premium quality,” Ms Duangporn said.

“The person who made the video clip has an intention to harm Thailand’s image,” she added.

Facebook users in Thailand have left Ms Prak harsh comments – some abusive – on her Facebook feed, saying she cooked it the wrong way and that plastic actually costs more than rice.

Thailand is the world’s second-largest rice exporter after India. The country exported over 9 million tonnes of rice last year. In recent years, fake rice from China made from potatoes, sweet potatoes and poisonous plastic has been exposed, sparking concerns worldwide.