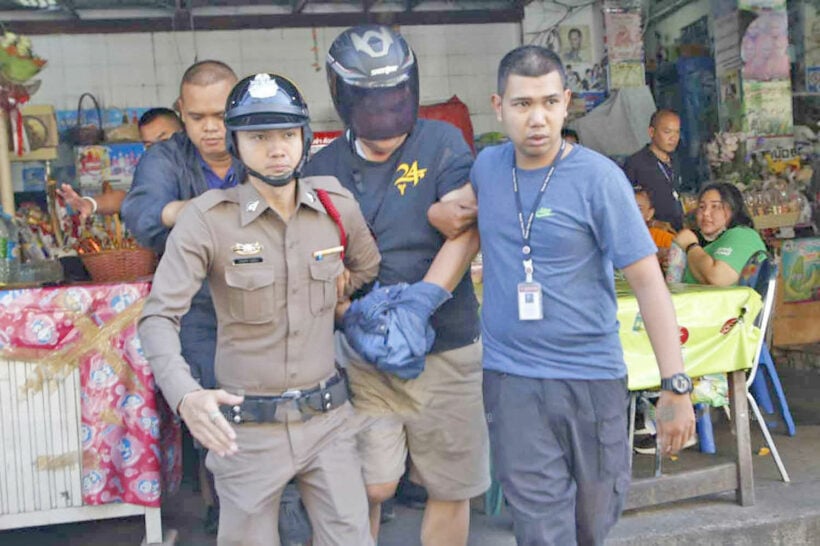 A Bangkok shop owner who set off a panic by firing dozens of gunshots on Friday morning was released on bail after his first court appearance yesterday. Forty-eight year old Ekachai Jaruksin faces charges of attempted murder, discharging a firearm in a public area, narcotics possession and using illicit drugs.

Police took him to the Criminal Court yesterday morning to seek his detention for 12 days while they investigate the case. But the court granted temporary release on 350,000-baht bond, on condition that he do nothing else to threaten public safety.

The drama began when shots were fired from the building of the Best Sports shop in a local market at around 4am Friday. Police found the man firing from the third floor of the shop. They cordoned off the area and asked relatives of the man, later identified as Ekachai, the shop’s owner, to calm him down. After negotiation, he surrendered around 10:30am and was taken into custody.

Police searched his room inside the shop and found two pistols, many rounds of ammunition, an undisclosed amount of crystal meth and drug paraphernalia.

The suspect told police he fired the shots in anger over family and business problems. He insists he had no intention of hurting anyone. But the incident caused panic in the neighbourhood, coming just days after the mass shooting which left 30 people including the gunman dead in Nakhon Ratchasima.