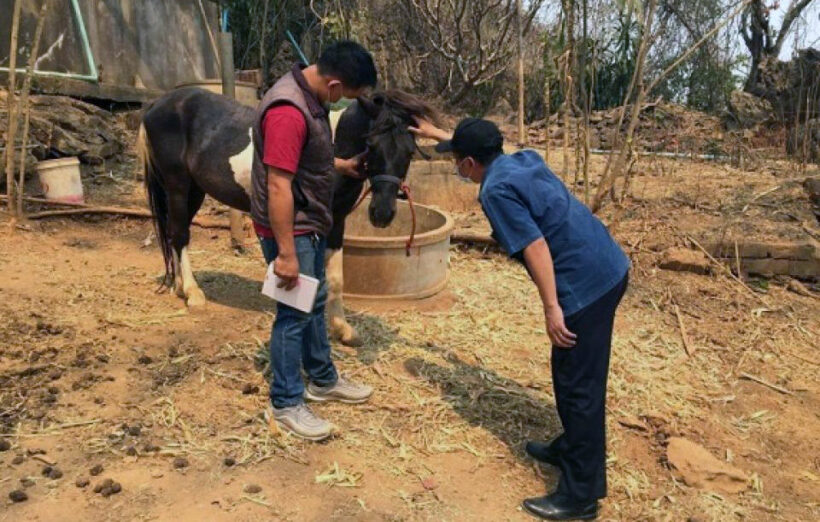 An outbreak of African Horse Sickness has already killed more than 200 horses in 4 provinces, including Nakhon Ratchasima, Prachuap Khiri Khan, Chon Buri and Phetchaburi since it was first reported on March 26. Now, at least 1 owner of a horse farm is considering suing the National Park, Wildlife and Plant Conservation Department, along with other agencies,  for approving imports of wildlife from Africa. African zebras are believed to be the source of the disease that has killed many prized racehorses.

The owner of a racehorse farm in in Nakhon Ratchasima, Uthen Chatphinyo, says AHS has killed 21 of his 160 horses. The dead horses were valued at around 50 million baht. The owner of another farm says he’s lost 20 horses that he bred for sale. Each horse was valued at 400,000 to 800,000 baht.

A group of  owners and academics yesterday asked the Agriculture and Cooperatives Ministry to include AHS in the list of diseases to be controlled under the Animal Outbreaks Act. The act bans any movements of horses, prohibits the import of zebras and other wildlife species, and mandates a panel to deal with AHS.

A former dean of the Faculty of Fisheries at Kasetsart University says it’s important to find out who imported AHS-infected wildlife from Africa which led to the transmission of the disease to local horses.

“Zebras, for instance, are freely imported through Suvarnabhumi International Airport as though they were cats or dogs. This is because zebras are not among the controlled species under the Convention on International Trade in Endangered Species of Wild Fauna and Flora. The state must investigate and find out exactly how many zebras were brought in between last December and February of this year and where the imported animals are.”

The Bangkok Post reports that, in February, some zebras were reportedly sold to buyers in the Hua Hin district of Prachuap Khiri Khan instead of being re-exported to China as planned. Blood tests revealed that these zebras were infected with AHS.

An investigation soon discovered that the outbreak began on Feb 24 at several farms in Nakhon Ratchasima in Thailand’s north-east. The department took all possible measures to contain the outbreak including screening horses, testing their blood for AHS and instructing farms not to move their horses.

There is a vaccine for AHS, but it is not currently available in Thailand.