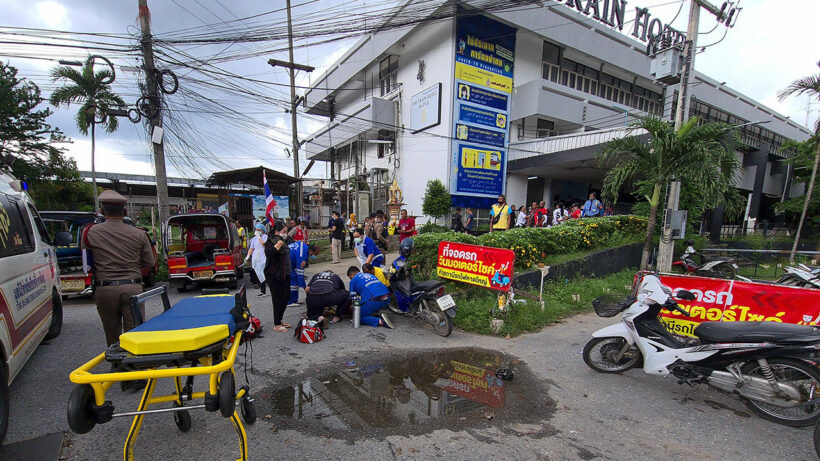 A parliamentary committee is responding to the demands from student and opposition protesters, who are calling for reform of the government, a new constitution, and even reform of the Thai Monarchy – the latter previously considered a ‘no go’ zone.The committee describes the upcoming f orum as an intimidation-free “safe zone” for the students to voice their opinions and share them directly with the country’s MPsThe so-called ‘dialogue’ is scheduled to happen next Tuesday, September 22, just three days after this weekend’d proposed anti-government rally which was meant to be held at the Thammasat University Tha Prachan Campus.The students have already submitted to the panel their so-called “10-point manifesto” for reform of Thailand’s monarchy. The reforms address the scrapping the controversial lese-majeste law, defunding of the royal family and stop the ‘palace’ from expressing political opinions.

A Songkhla tuk tuk driver is in critical condition after a rival driver allegedly shot the man multiple times for stealing his customers. The 40 year old allegedly shot the driver 9 times from behind, just as the driver was calling out to potential customers.When police arrived to the scene, they found another 40 year old on the ground with gunshot wounds to his chest and back. The alleged shooter was also still on the scene, carrying a .38 handgun and a brass knuckle.Witnesses noted that the 2 tuk tuk drivers often got into arguments, and sometimes fist fights, over customers.Police arrested the shooter and say he confessed to the shooting. He told police he was angry at the tuk tuk driver for taking his customers.

International travel restrictions have crippled Thailand’s tourism industry so much that Bangkok might end up with the highest loss of tourists out of all the major cities in the world. A report from the global forecasting company Oxford Economics predicts Bangkok will lose about 14.5 million incoming foreign tourists by the end of the year.Cities across the world are experiencing a drop in tourism, but Oxford Economics says Bangkok will be hit the hardest. The reports says that demand won’t even get back up its 2019 high until at least 2024. Strict international travel restrictions. and a mandated 14 day quarantine have contributed to the drastic drop in tourists, or at least the lack of any recovery in tourism numbers. Along with Bangkok, Phuket and Pattaya are in the top 20 most visited ‘cities’ or destinations in the world.

Stow your tray table and get ready for your favourite airline food, on the ground

Airplane cafes and on-ground flight experiences are becoming a thing, especially popping up around Bangkok. Thai Airways, still grounded due to the border closures, are turning the down time into a culinary spin-off. Thai Airways has not only opened a pop-up café to sell airplane food, but they are also offering flight simulations to the public.The stimulator flying experiences start at 12,000 baht for 30 minutes and go up to 36,000 baht for 90 minutes. It’s apparently the most realistic flight simulation in Thailand and is normally only used for training the pilots.The airline’s café has also “taken off.” The café at the Thai Airways headquarters in Bangkok gives the airline food experience without actually being in the air. Customers pose with luggage at the door and sit in spare airplane seats that the airline has re-purposed for the pop-up cafes. They offer dishes like pasta carbonara, Caesar salad with smoked salmon, and mango cheese cake.Wonder if they’re also serving inedible vegetable mush and stale muffins… that’s the food I’m most used to in the air… no names.

Red Bull will be grateful for the good PR today as British-born, Thai Formula One racer, Alex Albon, thanked the energy drink sponsors for their “faith” after he came third in last night’s incident-prone Tuscan Grand Prix, his first Formula One GP podium finish. The 24 year old finished in third place behind the Mercedes drivers to become the first Thai on the podium since 1950.His father, Nigel Albon is a former British racing driver who participated in the British Touring Car Championship and Porsche Carrera Cup. His mother, Kankamol, is from Thailand.In one of the most dramatic races for years, 6 cars had retired before a lap of racing had even completed. Albon made hard work of the result. Starting 4th, he dropped back to 7th at the second start and had to fight his way back up, which he accomplished with some scintillating pass moves