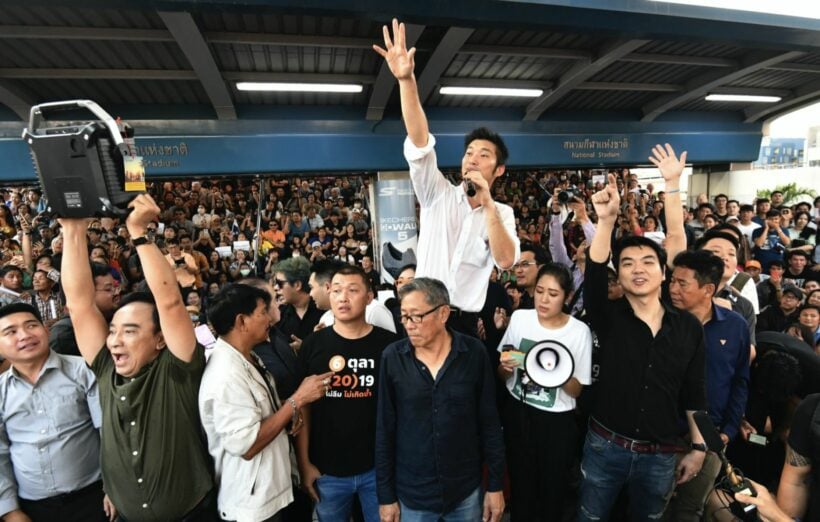 Should foreigners get involved in the Thai protests? Is it any of our business? Is there a danger of being targeted and thrown out of the country?

Most foreigners, certainly the vast majority, will say they’re uncomfortable even discussing local politics with Thais, especially THAT other big topic. Most are happy to walk the beaches, explore or sit in the bar and ponder the world around them without getting their hands dirty with domestic demonstrations.

But Human Rights Watch campaigner Phil Robertson challenges anyone to come up with a case of a foreigner being turned down for a new visa after appearing at the protest in Thailand.

“I would challenge people spreading these rumours to point to a single cause of a foreigner deported for going to a protest or for posting something critical on Facebook or Twitter. And the truth is they just won’t find any.”

But go online, anytime the news turns to protests, and the ‘farang gang’ make their thoughts clear, while hiding behind anonymous profiles. But none would ever be seen showing their support for Thai democracy, or any other cause, at an actual protest.

Not that we’d recommend grabbing your protest sign and water bottle and marching off to join in the next protest in Thailand. But the common belief that foreigners would be targeted and “thrown out of Thailand” may be an expat urban myth that has little evidence to support it.

We approached Brad Adams, Asia Director for Human Rights Watch and asked if they believed foreigners should get involved in Thai politics. Of course some people would say it’s “none of our business”.

“Foreigners who live and work in Thailand, or who have settled in the country and have Thai spouses and families, have the same rights to speak out on issues that affect their lives as anyone else. Basic civil and political liberties are not limited by nationality. To claim otherwise is to play into an unfortunate trend of increased xenophobia that has been on the rise in Thailand since the military coup in 2014.”

Responding to a post about the matter on Facebook ‘Regis’ said…. “Actually, i have no fear to say that the corrupt government is a sad joke here. They want to cancel my visa because i open my mouth? I don’t give a shit as I have the freedom to chose the country where i want to live. If they think that we have no other choice, they are making a big mistake. My freedom of speech is priceless, you can’t buy it with a visa. It wouldn’t take long for me to cross the eastern border. I can pack my stuff and leave within 24h, from anywhere. This is freedom. There are nice people, landscapes and excellent food as well on the other side of the Thai borders.”

Some foreigners point to the case of 47 year old game developer Yan Marchal, a French blogger who was paid a visit by the police in 2019 for posting a parody video mocking the NCPO’s theme song “Bringing Happiness Back to the People”.

Marchal later said there were no legal repercussions from the incident – and certainly no deportation attempts.

“The policemen were courteous, they had no animosity against me, they were just doing the job they had been tasked with.”

“I’ve not heard from the police since that informal visit. Since we are here on a visa, it’s a risk that we face if they want to revoke it. But I decide to be outspoken anyway because that is my nature.”

British blogger Richard Barrow also makes occasional reminders in his blogs, Facebook and Twitter posts about some of the inconsistencies and absurdities of Thai life as an expat, especially his campaign against dual pricing. Just recently (it’s almost an annual tradition) Richard wrote on August 13 that immigration officers had visited him with veiled threats that his visa may not be renewed. Comments on the post speculated that it was Richard’s outspoken comments about the Immigration bureau and dual pricing.

But on August 19 Richard announced that his visa had been reissued. He said that the visa “scare” was due to paperwork issues and nothing to do with the content of his posts.

(In fairness, most of what Richard writes is 90% fascinating tourism travelogues and puff pieces about Thai life – he’s the best ambassador the TAT could have!)

When the police summoned former Future First leader Thanathorn Juangroongruangkit to report to Royal Thai Police about  alleged violations against the Thai constitution, there were plenty of foreigners, including foreign diplomatic staff, waiting with other to protest his unfair treatment.

Still, there’s no denying, real or imagined, that fears of deportation or the loss of your visa exist. But the Human Rights Watch official said there’s simply no record of the immigration ever deporting or retaliating against any foreigner simply for attending protests.

“Certainly the Thai government is no angel in this regard, but we just haven’t seen any case of deportation or action against foreigners. Immigration has the right to check on the status of any foreigner here. If they wanted to use that in any way for intimidation they certainly could, but the reality is we’re just not seeing that.”

An operator at the Government Contact Centre hotline, speaking to Khaosod English, said… “that as long as a foreigner attending a protest does not engage in illegal activities, they will not be prosecuted for going to it.

“We do not prevent foreigners from going to protests. If they are peacefully going to protests, then there should be no problem,” he said. “If they’re not violent, they won’t be under surveillance. And to protest is within democratic rights as well.”

“But foreigners engaged in lese majeste (criticism of the Thai Kin, monarchy and Royal Family), violence, or any other illegal action may face prosecution like their Thai counterparts. Having a criminal record may also affect applications for visa renewal.”