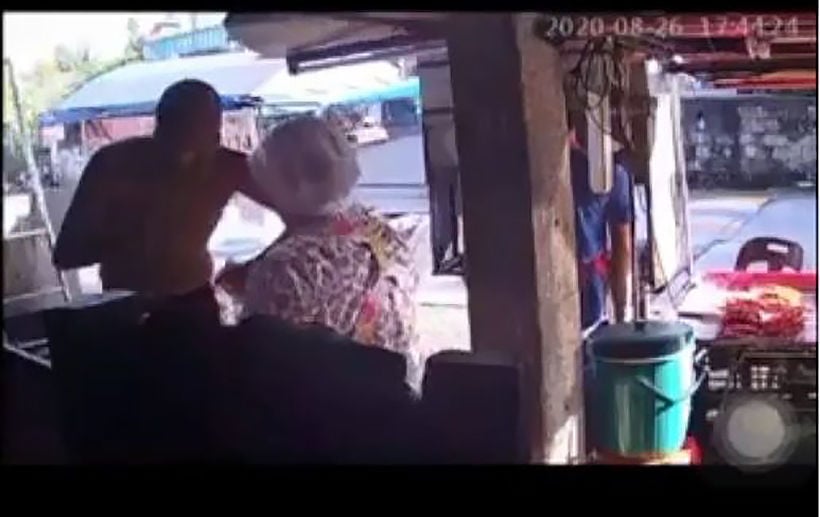 A Phuket woman has posted a video on Facebook showing a local man harassing her family. The incident happened in the southern province’s Kathu District. The man, who she claims is a gangster named “Dam”, says the woman’s father owes him money. Thai Residents reports that police have been notified but have done nothing. The gangster, carrying a gun and threatening to use it, walked into the family-owned chicken grill stall and started destroying property inside before shoving the mother. The woman states  the man visited the family 3 times in a day and will come again.

The video shows a shirtless man yelling in front of the chicken stall. An argument starts and the man walks towards the mother as if he’s going to attack her. He uses an object to smash goods in the stall and kicks the gate. Before leaving, the man threatens to shoot the family and the video is cut off.

The family say they’ve had issues with the man since the beginning of the month. On August 9 he went to the family’s home to harass them. The woman’s brother filed a police report but the man didn’t stop and continued to harass the family regularly, both at the home and at their business. They eventually decided to install a security camera system. After the latest attack, the family again called police, who told them to file a second report.

The brother went to the station to file another report when the man returned for the second time on the same day. The brother told the police and 4-5 officers came to the location but made no arrest. The Facebook user decided to file a lawsuit, but will have to wait about 2 weeks for the process to start.

Kathu police say they’re working on the case and searching for the man. A local villager in the area revealed that Dam is rich, drives fast, and is loud, often driving into other cars if he’s angry.