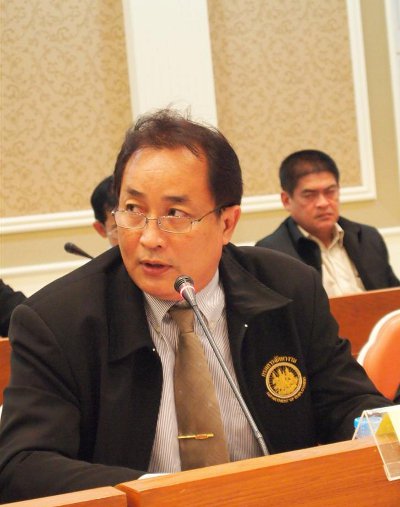 PHUKET: An outbreak of tuberculosis in Phuket that has hospitalized nearly 60 Burmese workers has prompted the Phuket Immigration chief to call for a more integrated approach to tracking their growing numbers on the island.

The committee, headed by Pheu Thai Party member Nithas Srinont, was in Phuket to learn more about issues related to low-wage foreign workers on the island and the planned hike in the provincial minimum wage to 300 baht a day.

Speaking before the committee, Col Panuwat said problems arise from the nature of the island’s labor-intensive construction industry, which causes workers to jump from project to project and change employers frequently.

There were also reports of employers taking advantage of their workers, he said.

“Currently each department keeps its own statistics. We need to have a more efficient database, because over the next five to 10 years the numbers are going to increase a lot,” he said.

“Another thing that concerns me is that over the past three months, 57 foreign workers have been sent to us after having been diagnosed with tuberculosis (TB),” he said.

Col Panuwat said in a phone interview with the Phuket Gazette after the meeting that those testing positive for TB must be deported.

Following the signing of an order by Phuket Gov Tri Augkaradacha yesterday, Phuket will become one of seven Thai provinces where the controversial 300 baht per day minimum wage will go into effect from April 1.

The government hopes the wage hike – a 35.7% increase over the existing rate – will ease the labor shortage in Phuket by attracting more Thai workers from other provinces.

The Phuket tourism industry has been particularly hard hit, with some 3,000 vacancies for service jobs at the moment, according to industry analysts.

Phuket Provincial Labor Office chief Suttipong Saisakares reported that as of June this year Phuket had a registered population of 351,909. Of the working-age population of 164,652, almost all (99.5%) were employed, he said.

Reporting on low-wage workers from Burma, Laos and Cambodia toiling under the government’s guest worker program, Phuket Provincial Employment Office Chief Noppadol Ployudee said that as of November 25 there were 61,954 workers enrolled in the system.

The vast majority of these (98.5%) were from Burmese, or from lands under the control of the Burmese junta.

To continue working under the program, applicants must first prove they are actually residents of Burma, Cambodia or Laos. Thus far, 35,091 workers have already completed the national verification process, while 5,675 more must complete the process before the January 20 or February 28 deadlines, he said.

In one of the most alarming statistics presented at the meeting, Mr Ployudee revealed that there were also 23,354 previously illegal migrant workers in Phuket that had “followers” 15 years of age or younger living with them. Most of these workers (20,558 or 88.4%) have already been issued work permits, he said.

The number of crimes committed by foreign migrant workers is “under control”, police told the committee.

Representing the private sector, Phuket Tourist Association Vice President Krisada Tansakul said, “There are 60,000 registered migrant workers, but I think there are more than 100,000 of them out there.

“On the positive side, they help us in terms of [coping with] the labor shortage. However, it has also caused some social problems since we lack an efficient management system,” he said.

See the hardcopy version of the Phuket Gazette on newsstands from today for more information on the labor shortage in the Phuket tourism industry, and analysis on how better use foreign migrant workers could be part of a long-term solution.