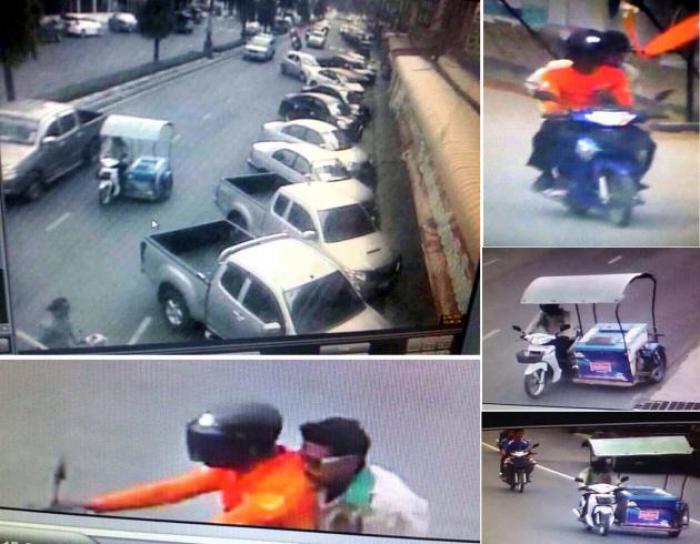 PHUKET: Police are on a hunt for a group suspected in bombing attacks that caused several casualties and massive damage in Yala last weekend. These suspects have been seen in images captured by closed-circuit TV cameras.

“We believe one group of attackers is responsible for the recent violence,” Yala police chief Maj-General Songkiat Wathakul said yesterday, refusing to elaborate.

On Sunday, a pickup truck stuffed with about 100 kilograms of explosives created a big blast in front of a furniture shop on Siroros Road in Yala’s Muang district, killing one person and injuring 28 others. A bomb inside a motorcycle with a sidecar also exploded on the same road that day.

Then on Monday, several other bombs went off in Yala causing damage estimated at well over Bt100 million.

Speaking on condition of anonymity, an official in the investigation team said at least four people had played a part in the recent bomb attacks.

“We could clearly see the face of one suspect,” the official said, adding that the suspects were seen arriving at the scene in a pickup and two motorcycles, including the one with a sidecar.

National Security Council (NSC) chief Lt-General Paradorn Pattanatabut said April had usually been a violent month in past years as it marked the anniversary of the establishment of insurgent group Barisan Revolusi Nasional (BRN) among other key incidents.

However, he believed that the change in top officials put in charge of suppressing unrest in the deep South was also a factor.

The region comes under the jurisdiction of the Fourth Army Area, which has just got a new chief.

Paradorn, who has attended several rounds of negotiations with the BRN, is also leaving the helm of the NSC. The insurgents want to know if the new NSC chief will adopt the same approach as he did, he said.

Deep South Watch director Assistant Professor Srisompob Jitpiromsri shared Paradorn’s views, saying violent attacks usually rose in April, May and June every year and that the disruption of peace talks could also play a role. Another key factor, he said, was that this year marked the 10th anniversary of the resurgence of violence in the deep South.

“Violence has been growing every year,” he pointed out.

In the wake of bombing attacks in Yala, Pattani City Municipality Mayor Pitak Korkiatpitak urged residents not to leave anything, be it a stall, a bench or other items, unattended outside their homes to cut down on the risk of hidden bombs.

PHUKET: The ruling Pheu Thai Party and politicians in power yesterday pressed for legal action against anti-government protest leader Suthep Thaugsuban, who had threatened last weekend to nominate a new prime minister after gaining what he termed “sovereign” status.

Pheu Thai spokesman Prompong Nopparit approached the Department of Special Investigation (DSI) yesterday, accusing Suthep and other anti-government protest leaders of sedition. He said Suthep’s threat was part of a plot to overthrow the government in a “modern-time coup”.

The spokesman also said he would later this week petition the Constitutional Court against Suthep and others over the matter.

DSI director general Tarit Pengdith said yesterday that he believed Suthep and other protest leaders had committed insurrection, in violation of Article 113 of the Penal Code.

Suthep, secretary general of the People’s Democratic Reform Committee, announced on Saturday that if the anti-government movement managed to “seize sovereignty back to the people” and gained “sovereign” status, he would nominate a new prime minister for royal endorsement in his capacity as “the people’s medium”.

He said a “people’s assembly” would then be set up to reform the country by amending the Constitution and relevant laws, before a new election would be organised.

Caretaker Prime Minister Yingluck Shinawatra yesterday said Suthep’s remarks had led to questions because his claim of sovereign status was not lawful.

People could not simply set up a cabinet or a legislative assembly, she said, adding, “We have to follow the law if we want to have credibility in the international community.”

The premier also said she believed Army commander-in-chief General Prayuth Chan-ocha, in his capacity as deputy director of the Internal Security Operations Command, already had a standpoint in regard to Suthep’s claim of sovereign status.

“I think he should [already] have a standpoint [on this]. In fact, he should know how to react in this case. The security sector should act even-handedly. No question is needed; I think he has the answer in his mind,” Yingluck said.

The Army had earlier filed police complaints when red-shirt supporters of the government raised the idea of dividing the country and declaring “independence” for the northern part of Thailand.

Meanwhile, US Ambassador Kristie Kenney yesterday met Yingluck, who is also the defence minister, for about 40 minutes at the Defence Ministry to discuss the current political situation. Also present was Daniel Russel, the US assistant secretary of state for East Asian and Pacific affairs. Russel handed the PM a letter from US Secretary of State John Kerry, Foreign Minister Surapong Tovichakchaikul said.

Kerry expressed concern over the current political situation and said the US government hoped there would be no coup in Thailand, Surapong said.

The foreign minister said yesterday that he would have Suthep’s statement translated into English, and would send the translation to all foreign embassies in Thailand.

“Suthep has already faced a charge of sedition, and what he said [most recently] clearly underlines his wrongdoing,” Surapong said.

Pheu Thai yesterday issued a statement calling on the people, relevant state officials and independent agencies not to cooperate with Suthep about his threat to seize power from the government.

The ruling party said the authorities should take legal action against him.

“The Pheu Thai Party sees an election as the country’s best solution. We call on the Election Commission and the government to issue a law for a new election to be organised as soon as possible,” said Bhokin Bhalakula, a senior legal expert of the party.

Labour Minister Chalerm Yoobamrung, who heads the government’s Centre for the Administration of Peace and Order, yesterday said that Suthep’s remark about sovereign status was tantamount to committing political suicide. His plan was clearly an act of sedition, he added.

Caretaker Deputy Commerce Minister Nuttawut Saikuar, a red-shirt leader, yesterday called on the Army chief to make it clear whether he would tolerate Suthep’s action.