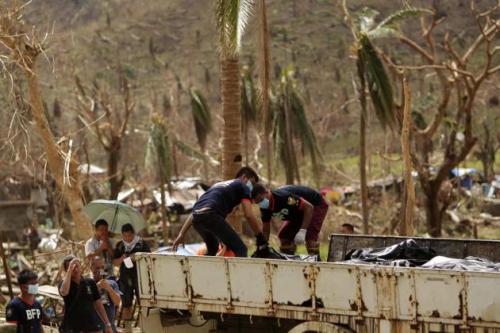 
Doctors, medicines heading to Philippines
The Nation / Phuket Gazette
PHUKET: The Public Health Ministry is expected to send 60 tonnes of medical supplies on an Air Force plane to the Philippines on Monday (Nov 18), with the government announcing yesterday it would initially provide Bt6 million to help people hit by Typhoon Haiyan.

Ministry permanent secretary Narong Sahamethapat said the ministry would also send three medical teams, each made up of 15 doctors, sanitation rehabilitation and mental-health experts – a total of 45 people – to set up a field hospital.

Public Health Minister Pradit Sintavanarong said the ministry would hold a meeting today (Nov 15) to ensure the medical teams are ready. Each would stay in the typhoon-hit area for two weeks, and could travel after getting confirmation from the Foreign Affairs Ministry.

After a meeting of agencies yesterday about aid to the Philippines, Department of International Economic Affairs chief Chutintorn Gongsakdi said that besides the Bt6 million, the Cabinet would next week consider dispatching an armed forces’ C130 aircraft with supplies and necessities to aid the survivors.

Other relief items would be sent via sea freight, which would take seven days to reach the typhoon-hit country, he said.

Thailand would also send 5,000 tonnes of rice via the Asean+3 (China, South Korea and Japan) mechanism, he said. Other needed items were canned food, drinking water, body bags and tents.

Chutintorn said Thailand would work with the World Food Programme to provide aid over six months – distributing food for two months, then working on rehabilitation for four months.

Supreme Commander General Thanasak Pratimakorn said the military was discussing the fastest way to send aid and ensure it matches the needs of Filipino victims, while the armed forces was preparing the C-130 plane with necessities.

Prayuth also sent a letter to the Philippine army, expressing regret at the casualties and damage caused by Haiyan and offering Thai Army support upon request.

Prayuth instructed the Army’s disaster-mitigation centre to prepare medical supplies and military canine teams for search-and-rescue missions to be sent to the Philippines over the coming days.

Military engineer kits, plus others for producing drinking water, field tap-water systems and electrical generator sets were also ready if requested by the Foreign Affairs and Defence ministries, he said.


Yingluck to be target of censure move
The Nation / Phuket Gazette
PHUKET: The opposition’s censure debate late this month will focus on Prime Minister Yingluck Shinawatra, with likely attacks on her leadership skills, according to sources from the Democrat Party.

Opposition MPs taking to the floor during the no-confidence debate would also direct their attack at the Shinawatra family, with Yingluck’s big brother and former prime minister Thaksin Shinawatra likely to be the biggest target, the sources said.

The Democrats will file a motion of no confidence either today or on Monday, paving the way for a censure debate before November 28, according to chief opposition whip Jurin Laksanavisit, who is a senior Democrat MP.

“Opposition lawmakers are ready to censure the government,” he said.

The current parliamentary session ends on November 28. Jurin said the censure would focus on a number of issues related to the government’s performance.

Chief coalition whip Aumnuay Khlangpha said yesterday that a censure debate might be held on November 22, 23 and 24 if the party files a censure motion this week.

The debate appears likely to be held on a weekend because Yingluck is scheduled to travel to Singapore on November 26 and 27, where she will attend the Thai-Singapore Prime Ministers’ Retreat.

Jurin said the PM had often used overseas travel as a reason to miss parliamentary events. Government Spokesman Teerat Ratanasevi said the prime minister would definitely attend the censure debate and would be ready to respond to the opposition’s allegations.

However, Yingluck’s schedule for the Singapore trip would not be changed.

“The schedule was made beforehand, and it is not meant to coincide with the censure debate,” Teerat said.

Jurin, meanwhile, voiced concern about the risk of a confrontation between the red shirts and anti-amnesty protesters. He called for the prime minister to intervene and ensure that both sides remain safe.

Former Democrat MP Suthep Thaugsuban announced on Wednesday night that he would step up the rally currently at Democracy Monument from tonight. But before that, anti-government protesters including school and university students are due to march on Rajdamnoen Road.

Meanwhile, the red shirts have scheduled a mass rally at Muang Thong Thani from Monday until Wednesday next week.

Security Council secretary-general Paradorn Pattanatabut said yesterday that the authorities would keep close watch today over the intensified protests, voicing concern that a “third hand” might intervene and cause trouble.

“The protests will likely drag on until the end of this month,” the NSC chief said.

Paradorn said rally organisers might expect two events – a judicial ruling on a charter amendment bill related to the Senate or the censure debate, to spur their protests. He added, however, that the outcome of the bill could favour the government, contrary to the organisers’ hopes.

Red-shirt chairwoman Thida Thavornseth said anti-amnesty rallies had lost momentum because of the end of the amnesty push by the government. Thida said the Democrats wanted the protests to persist in order to manipulate public sentiment.

She pointed out that the red shirts’ rally site was in a closed compound at Muang Thong Thani to avoid a confrontation between rival protesters. She said the red shirts suspected that the anti-amnesty move was just a pretext to try to bring down the government.

“The reds rally is not meant to sway the Constitutional Court in the upcoming judgement for the charter amendment bill but to send a signal to the opposing side,” she said.

The Constitutional Court, whose office is at the Government Complex on Chaeng Wattana Road, has scheduled Wednesday to announce its ruling on a charter amendment bill related to the election and qualifications of senators.

Thida said the red shirts disagreed with any bid to change government via extra-constitutional means.

Anucha Romyanant, deputy spokesman of the Peacekeeping Operations Centre, said yesterday that the Metropolitan Police would ask protesters occupying the streets in the city to return the area to prepare for celebrations for His Majesty the King’s birthday early next month.

Currently, there are three stages for pol