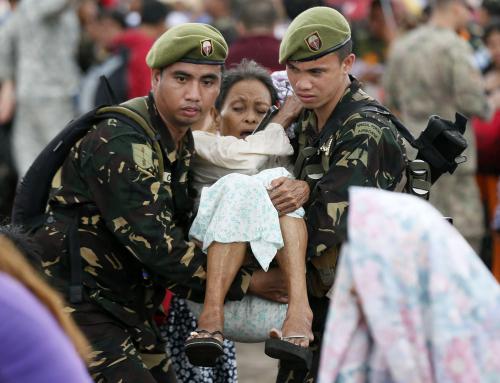 PHUKET: The Phuket chapter of the Red Cross Society has joined the relief effort to provide assistance to victims of Super Typhoon Haiyan, which devastated the central Philippines last Friday.

“Right now we can only accept donations of money, which we will send to our head office in Bangkok,” Phuket Red Cross staffer Sarawut Rukkhaw told the Phuket Gazette.

“We are not accepting any other forms of donations, such as food or clothing, as we have not made any arrangements for how such items can be delivered,” Mr Sarawut explained.

“Every person who makes a cash donation will be issued a receipt,” he said.

The office is open to receive donations from 8:30am to 4:30pm, Monday to Friday.

“The Phuket Government is calling on all private enterprises and government departments to help the people of the Philippines in their time of need,” he said in a statement issued yesterday.

Donations to the “Thais Helping Filipinos” relief fund can be made to:

Meanwhile, Prime Minister Yingluck Shinawatra on Tuesday sent her formal condolences to the Philippines on the devastation and loss of life caused by Typhoon Haiyan. She also instructed the Thai Foreign Ministry to integrate relief efforts and help raise funds for typhoon victims.

The Thai Ministry of Defense has prepared a C-130 aircraft, ships, a field hospital, medical personnel, technician-solders, sniffing dogs, food, drinking water and equipment to be deployed to the Philippines.

A mobile medical unit will be dispatched to serve as a field hospital. It can operate in the area for about two weeks.