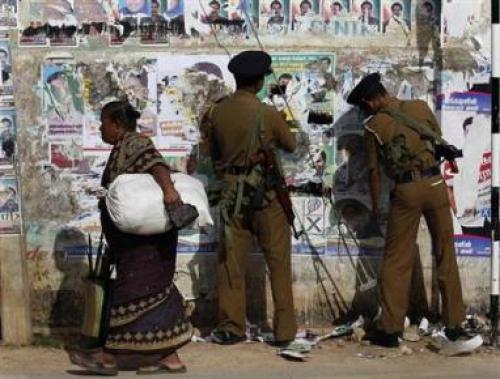 
Army occupation angers Sri Lankan Tamils four years after war ends
Reuters / Phuket Gazette
PHUKET: The threats came by text message, a phone call and a delivery of two cow skulls. The message was clear: stop protesting against the army’s occupation of your land or you will be killed.

Four years after Sri Lanka’s army crushed the Tamil Tiger guerrilla army and ended a civil war that had lasted nearly three decades, Tamils say they are blatantly repressed in Jaffna, the capital of this Indian Ocean island’s northern peninsula.

Newspaper printing machines have been burned, former rebels say they face extortion and sexual harassment and army spies keep a close eye on political activity. It all makes ethnic Tamils feel they are still seen as enemies of the state.

As a summit of Commonwealth nations opens in Sri Lanka’s capital on Friday, the nation is under intense scrutiny after a chorus of warnings from the United Nations and the West that its failure to resolve old enmity means it is losing the peace.

He and his government say Sri Lanka is on the path to reconciliation, helped by fast economic growth, and bristle at charges of creeping authoritarianism favouring the Sinhalese majority.

But some observers warn that, in the long term, the repressive climate and slow progress towards Tamils’ demand for more autonomy risks making Rajapaksa’s fears of a resurgence in violence a self-fulfilling prophecy.

“If it continues to close off avenues of peaceful change, the risks of violent reaction will grow,” the International Crisis Group said this week in a report entitled ‘Sri Lanka’s Potemkin Peace: Democracy Under Fire’.

For land activist Somasundaram Sugeerthan, the threat beeped onto his phone one Sunday night. It read: “Hey dog, do you know what will happen to you if you protest? We’ll send your body without the head in front of your home.”

In the morning, he found a cow’s skull on the gatepost of his house. Cows are worshipped by ethnic Tamils like Sugeerthan who follow the Hindu religion on the Buddhist-majority island.

Sugeerthan believes the threat came from the army, which still occupies 6,400 acres (2,400 hectares) of prime farmland outside Jaffna despite promises to return it to deed holders after the war ended in 2009.

Military spokesman Ruwan Wanigasooriya said the army had released over 25,000 acres since the war and more than half of the land still occupied is used for an airport and port.

“Even out of that, we are trying to release as much land as possible,” he said, branding claims of threats by military agents “false allegations simply to serve one or other agenda”.

The war pitted the army against the ruthless Tiger separatists, infamous for popularising the suicide bomb and striking civilian targets. Its bloody stalemate ended after Rajapaksa launched an assault in 2006 that ultimately wiped the rebels out.

The United Nations says tens of thousands of civilians died during the assault, mainly due to army shelling but also because many were used by the Tigers as human shields. It has called for an international inquiry into allegations of war crimes in the final months of the conflict.

Land is perhaps the most sensitive issue in post-war Sri Lanka. Tamil leaders believe the government has a strategy to give army-occupied land to Sinhala Buddhist settlers to change the demographic mix.

“The reason is the ethnic percentage range,” Sugeerthan said, barefoot and in a white sarong, among a few dozen protesters symbolically fasting under the watchful eye of police and men with cameras whom he suspected were army intelligence. “They want to settle the area with non-Tamil army families.”

The government denies this, but the army presence and the climate of fear and suspicion in Jaffna spreads mistrust and a belief that the Tamil population is still seen as a threat.

“We are not insurgents, we want to make peace, we want a settled life like the people of the south,” said retired teaching assistant B. Murugesu, who was forced off his land in 1990 and has drifted between half a dozen towns ever since.

Peacetime has brought new buildings, smooth roads and gleaming consumer showrooms to Jaffna, a watery peninsula that was cut off from the country and the rest of the world until 2009. But it has not changed attitudes towards many Tamils, especially those with links to the former rebels.

“It is an occupational army … everything is being done to repress the rights of the people, take over their lands, take over economic activities,” said C.V. Wigneswaran, the newly elected chief minister of the northern province.

The airy offices of Uthayan, a leading newspaper in Jaffna, are decorated with gruesome photos of six journalists slain in armed attacks since 2006. The walls are riddled with bullet holes. In April, a group of unknown armed men poured gasoline over the central printing press and set it alight.

“There is no chance at all for reconciliation, the government is not inclined to seek a solution,” said E. Saravanapavan, the owner of the newspaper, which represents the views of the Tamil National Alliance (TNA), the former political proxy for the Tigers that won the September election.

Although the TNA won with a landslide, the new chief minister finds his decisions blocked by the governor, a retired general appointed by Rajapaksa.

Former rebel fighters are especially vulnerable. Viewed with suspicion by the army, even after a government rehabilitation programme, many struggle to find work and are ostracised partly because other Tamils fear harassment for associating with them.

They are frequently picked up by intelligence agents and taken into custody. Often money changes hands to stop threats.

Human Rights Watch and advocacy group Freedom From Torture have recorded dozens of cases of former fighters now living in Britain who claim they were tortured in custody after the war.

Ananthi Sasitharan, the wife of a rebel leader who has been missing since he surrendered at the climax of the war, said women whose husbands disappeared or were killed at that time are sometimes coerced into having sex with army officers.

No victim of sexual violence was willing to meet Reuters for this story, citing fears of social stigma and reprisals.

One ex-rebel glanced nervously out a window as he recounted how he had been ordered to visit a local military base several times in the last year, and was forced each time to pay bribes.

Soldiers in civilian dress he recognises from the base also regularly visit his corner store to demand small payments. He said he had paid a total of $35,000 to soldiers since being released from jail in 2011.

Wigneswaran, the new chief minister, says that – so long after the war – there is no need for a robust military presence, and worries about where it will lead.

“If you allow this to happen it will definitely lead to some form of violence in the future,” he said.