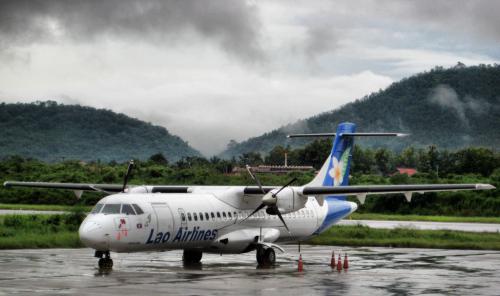 PHUKET: Five Thais were among 49 passengers and crew killed when a twin-engine Lao Airlines plane plunged into the Mekong River yesterday as it attempted to land at an international airport in Laos’ Champasak province, Thai Foreign Ministry spokesman Sek Wannamethee said.

Some of the five Thais killed on the flight from Vientiane were reportedly employees of the Petroleum Authority of Thailand travelling to Champasak on a working visit, according to a senior PTT official.

Flight QV301 was scheduled to land at Pakse International Airport at 4pm. A well-informed source said the aviation control tower at Pakse Airport recommended the pilots not land at the airport because of the poor visibility caused by Typhoon Nari.

The storm has brought severe weather to Thailand, Laos and Vietnam.

Despite the warning, the pilots insisted on attempting to land, but failed to do so because strong winds buffeted the aircraft. The pilots tried to raise the nose of the aircraft but were blown off course and crashed into a rocky island in the middle of the Mekong River about eight kilometres from the airport.

The aircraft broke into two parts on impact and sank into the river in the Ponethong district of Champasak, which is opposite Thailand’s Ubon Ratchathani province.

PHUKET: Three economic ministers involved in the rice-pledging scheme yesterday came out to defend the government in the face of criticism by academics and a former minister over what they claimed was a massive loss to date.

The ministers said the loss should not in fact exceed Bt100 billion a year, while insisting that the government would continue with the pledging programme.

Their defence of the scheme followed comments by former deputy prime minister and ex-Bank of Thailand chief MR Pridiyathorn Devakula and the Thailand Development Research Institute that two years of pledging had created a cumulative loss of Bt425 billion.

Of this amount, only Bt210 billion had gone to farmers, but more than Bt115 billion had benefited other persons, according to Pridiyathorn and the TDRI.

The information and figures revealed by Pridiyathorn are too concise and have not been proved, he said, adding that anyone in possession of information about corruption in the rice-pledging scheme should share it with the government, so that it could be investigated.

“Pledging was a choice made by farmers, and it has been created to help farmers. The Bank of Agriculture and Agricultural Cooperatives has directly transferred Bt330 billion from the pledging project budget to 2 million farmers. Besides farmers, nobody can earn money from the pledging,” he said.

Niwatthumrong said the government would only tote up the total loss from the scheme after selling all its stockpiles of pledged rice.

The latest balance account was undertaken in January, which showed losses of about Bt100 billion a year, he said.

The minister also explained that without pledging, farmers would earn only Bt7,000 a tonne, while the scheme meant they could bring in about Bt11,000 per tonne. Deputy PM and Finance Minister Kittiratt Na-Ranong said the government would continue the pledging scheme as it benefited farmers.

However, the administration is prepared to listen to all concerns and suggestions about the programme, he said.

He said Pridiyathorn should be careful about expressing his opinion, as there was a difference between a loss-on-account balance and an actual loss.

“I understand that some economists are not educated about accounting. Any figures referring to losses should be presented with care,” said Kittiratt.

He added that the government would have an adequate budget to continue its rice-pledging scheme, as the Cabinet’s authorised limit was as high as Bt500 billion. Deputy Commerce Minister Yanyong Phuangrach, meanwhile, said the government’s pledging was aimed at helping farmers, and it was normal to face losses in such a programme.

However, the losses would not be as high as critics have claimed, and should not be more than Bt100 billion a year, he said. Yanyong said that if the government faced a huge loss of Bt425 billion, as Pridiyathorn and the TDRI claimed was the case, it would need to sell rice at a very low price – at less than half its costs, which would be impossible.

PHUKET: The Department of Special Investigation is still demanding criminal prosecution of the construction company involved in the scandal over police-station renovations, despite reports that the Office of the Attorney-General decided to drop the case.

DSI director-general Tarit Pengdith said yesterday that he had insisted that criminal action be taken against PCC Development and Construction for failing to rebuild 396 police stations across the country, but it would be up to the attorney-general to indict them.

The company was well aware that its quote for the project was ‘low-ball’ and it could not complete the work on schedule, he said.

Witnesses had testified that the firm had bribed politicians after it secured the contract, he said.

“If [the state] does not sue the company, it might affect the case against former prime minister Abhisit Vejjajiva and former deputy prime minister Suthep Thaugsuban that has already been submitted to the National Anti-Corruption Commission, as there must be a link between a private company and government officials in a corruption case,” he said.

PCC executives had confessed that they paid kickbacks to politicians after winning the bidding, Tarit said. There was also evidence that politicians were involved in changing the bidding procedures and specifications.