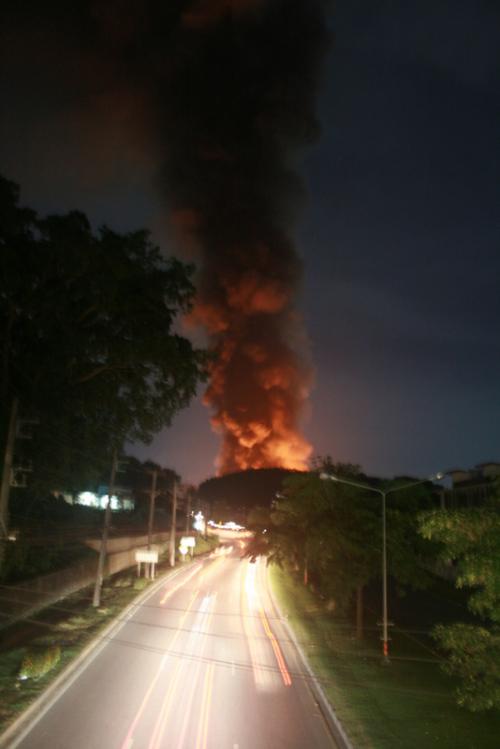 PHUKET: The main SuperCheap shopping warehouse in Phuket burst into flames tonight, turning into an unstoppable inferno and sending a cloud of black smoke over a kilometer into the air.

Every fire truck in Phuket was called to the scene, as well as trucks from nearby provinces. Fire fighters have yet to get the blaze under control and are now focused on containing the fire and preventing the flames from igniting neighboring signs and trees.

The store on Thepkrasattri Road was still open when the fire broke out at about 9pm, and bystanders reported hearing screams for help from inside the building. As this report is filed, it is not known how many people are in the building.

Witnesses heard explosions, a rescue worker with the Kusoldharm foundation told the Phuket Gazette. Occasional explosions continued to rock the facility hours after the blaze started.

Early estimates are that damages will reach at least 100 million baht.

When a Gazette reporter left the scene after midnight, he reported seeing Phuket Vice Governor Sommai Prijasilpa, Phuket City Police Chief Sermpan Sirikong and mayors from every municipality on site.

The massive, sprawling store was a ragtag Phuket institution, selling everything from ready-made food and groceries to plants to plastic products, goldfish, prescription drugs, cement mixers and car accessories.