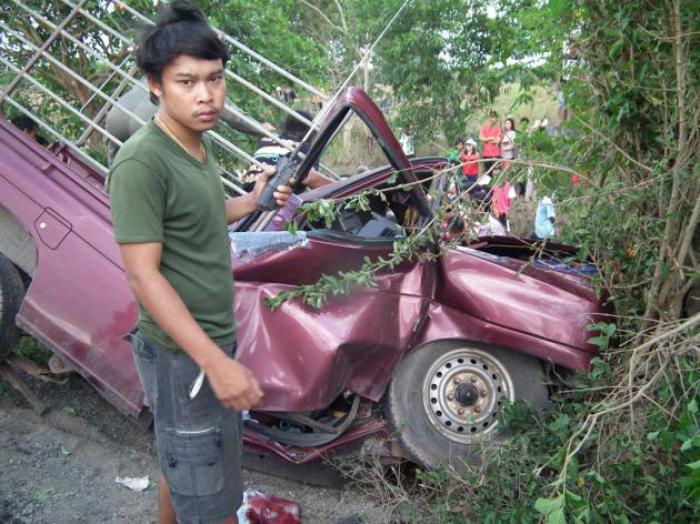 PHUKET: With the festive Songkran mood in the air, organisations from various sectors have come together to make the upcoming holiday “safe and happy” for everyone.

Caretaker Prime Minister Yingluck Shinawatra yesterday expressed hope that the next seven days would be “days of happiness”, not dangerous days.

“We will work with the private sector, foundations and communities to achieve the goal,” she said.

While millions of Thais celebrate the Songkran Festival with much joy, the festivities usually see a huge number of accidents with heavy casualties.

According to official statistics, road accidents kill about 33 people in Thailand each day on average. The number jumps to 40-50 during long holidays like New Year and Songkran.

In a bid to promote road safety, the Songkran period has been designated the “Seven Dangerous Days” to remind revellers that they need to reduce risk factors while on the roads.

This year, the “Seven Dangerous Days” associated with the Songkran Festival run from today to April 17.

Yingluck yesterday presided over a meeting to plan road-accident prevention measures for the Songkran holiday break.

She said the efforts addressed the issues of where to splash water, how to drive safely, and when to refrain from alcohol consumption.

Yingluck said relevant authorities should also provide useful telephone numbers to people so they know where to turn when in need of help.

As it did last year, the US Embassy has produced a video clip celebrating the Songkran festival. The clip, lasting 1:34 minutes, shows embassy staff dancing along and lip-synching to a Thai song posted on YouTube.

The Public Health Ministry has vowed to put more than 160,000 medical workers on standby at state hospitals across the country to ensure road-accident victims get prompt attention.

Nakorn Silpa-archa, who heads the Labour Ministry’s Department of Skill Development, said his agency and volunteers would operate vehicle check-and-maintenance service booths across the country between today and April 17.

“Motorists can drop in to get the services plus massages and beverages,” he said.

PHUKET: As violence escalates in the deep South, with a fresh spate of bombings in Yala, the Central Investigation Bureau (CIB)’s police education project has come up with “self-protective measures” for officials and residents in the region.

Bureau commissioner Pol Lt-General Pongpat Chayaphan assigned a CIB project working team, led by Pol Colonel Theeradech Thamsuthee and Pol Lt-Colonel Songrak Khunsri, to study researches about conflict areas around the world. From their research they compiled a list of self-protective measures for southern police and residents in risky areas.

With the main idea being “don’t make yourself an easy target”, the list of self-protective measures suggests:

• Avoid routines: one should not follow a routine that would make you vulnerable to attacks.

• Vary routes and times to and from work.

• Exercise (like jogging) on different routes/times and don’t exercise alone.

• Vary times/places for shopping, lunch, and other appointments.

• Be prepared for an unexpected event.

• Unless necessary, don’t wear uniforms or military items in public.

• Be alert for surveillance attempts, suspicious persons or activities, and report them to authorities.

• Be alert to, and aware of, changes in the security atmosphere.

Songrak said his group’s studies concluded that the battle against terrorism should not aim for victory over the opposition, but should consider first the safety of people living in conflict areas like the deep South of Thailand.

He urged that abnormal situations in a conflict area required special protocols. These self-protective measures had emerged for individuals to apply to their lifestyles and protect themselves, he added.

PHUKET: A 16-year-old boy was killed and his partner badly injured when a bomb exploded in their rented home in Bangkok’s Bueang Kum district early yesterday.

The young couple had just moved from Angthong, with their seven-month-old baby, 10 days ago.

Rames Chu-in was killed at the scene, while Namprao Iamwilai suffered wounds to her back, right leg and fingers. “Fortunately, our baby is unharmed,” said Namprao, also 16.

The baby was with Namprao’s grandmother in the room next door when the explosion took place.

“The victim may have brought it home from somewhere,” he said.

Namprao said Rames was well behaved and diligent and worked at a body and paint shop nearby.

“He had no conflicts with anyone,” she said, adding that she had no idea how the bomb hit their home.

“We were lying in bed watching TV. There were no suspicious items nearby.”

Namprao’s grandmother, Thong-poon Srikos, confirmed that Rames was watching TV before she left his home.

“The explosion woke me up and I found him dead,” she said.

PHUKET: Police will today ask the court to issue an arrest warrant for a red-shirt leader who allegedly insulted the monarchy in a recent interview with the foreign press, the government’s Centre for the Administration of Peace and Order (CAPO) said yesterday.

CAPO said its examination of the clip found that Ko Tee’s interview might violate the lese majeste law in Article 112 of the Penal Code.

Caretaker Prime Minister Yingluck Shinawatra has ordered police to take legal action against those involved in this case.

The centre also warned the public not to share or distribute the clip or they could be prosecuted under both the lese majeste and computer crime laws.