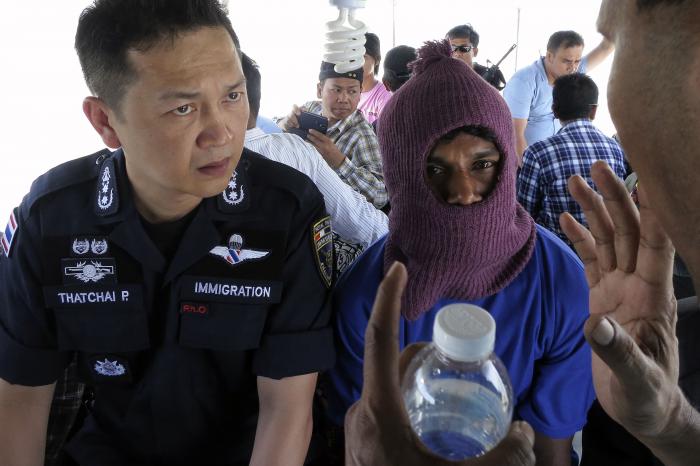 PHUKET: After a two-hour trek through swamp and jungle, Police Major General Thatchai Pitaneelaboot halts in a trash-strewn clearing near Thailand’s remote border with Malaysia.

“This is it,” he says, surveying the remains of a deserted camp on a hillside pressed flat by the weight of human bodies.

Just weeks before, says Thatchai, hundreds of Rohingya Muslim refugees from Myanmar were held captive here by one of the shadowy gangs who have turned southern Thailand into a human-trafficking superhighway.

With Thatchai’s help, Thailand is scrambling to show it is combating the problem. It aims to avoid a downgrade in an influential U.S. State Department annual report that ranks countries on their anti-trafficking efforts.

But a Reuters examination of that effort exposes deep problems in how Thailand defines human trafficking, exemplified by its failure to publicly recognize the lucrative trafficking of thousands of Rohingya confirmed in Reuters investigations published in July and December.

In March, Thailand submitted a 78-page report on its trafficking record for 2013 to the State Department. Thai officials provided a copy to Reuters. In the report, Thailand includes no Rohingya in its tally of trafficked persons.

“We have not found that the Rohingya are victims of human trafficking,” the Thai Ministry of Foreign Affairs said in a statement. “In essence, the Rohingya question is an issue of human smuggling.”

The distinction between smuggling and trafficking is critical to Thailand’s assertion. Smuggling, done with the consent of those involved, differs from trafficking, the business of trapping people by force or deception into labour or prostitution.

A two-part Reuters investigation in three countries, based on interviews with people smugglers, human traffickers and Rohingya who survived boat voyages from Myanmar, last year showed how the treatment of Rohingya often constituted trafficking. Reporters found that hundreds were held against their will in brutal trafficking camps in the Thai wilderness (story here).

A record 40,000 Rohingya passed through the camps in 2013, according to Chris Lewa, director of Arakan Project, a humanitarian group.

The Rohingya’s accelerating exodus is a sign of Muslim desperation in Buddhist-majority Myanmar, also known as Burma. Ethnic and religious tensions simmered during 49 years of military rule. But under the reformist government that took power in March 2011, Myanmar has endured its worst communal bloodshed in generations.

After arriving by boat to Thailand, criminal networks transport Rohingya mainly into neighbouring Malaysia, a Muslim-majority country viewed by Rohingya as a haven from persecution. Many are held by guards with guns and beaten until they produce money for passage across the Thai border, usually about $2,000 each – a huge sum for one of the world’s most impoverished peoples.

Thailand faces an automatic downgrade to Tier 3, the lowest rank in the U.S. government’s Trafficking In Persons (TIP) Report, unless it makes “significant efforts” to improve its record, according to the State Department. The agency is expected to release its findings in June.

A Tier 3 designation would put Thailand alongside North Korea and the Central African Republic as the world’s worst centres of human trafficking, and would expose Thailand to U.S. sanctions.

If Thailand is downgraded, the United States, in practice, is unlikely to sanction the country, one of its oldest treaty allies in Asia. But to be downgraded would be a major embarrassment to Thailand, which is now lobbying hard for a non-permanent position on the United Nations Security Council.

Reuters asked New York-based Human Rights Watch to review the report that Thailand recently submitted to the State Department. The watchdog group, which monitors trafficking and other abuses globally, said it was concerned that two-thirds of the trafficking victims cited in the report were Thai nationals.

“Any examination of trafficking in Thailand shows that migrants from neighbouring countries are the ones most trafficked,” said Brad Adams, the group’s Asia director. “Yet Thailand’s identification statistics show far more Thais than migrants are found as victims.”

He added that the numbers were also flawed due to the absence of Rohingya among the list of trafficking victims. Thailand failed to recognize “the grievous rights abuses the Rohingya suffer in these jungle camps, and the fundamental failures of the Thai government to do much about it.”

The State Department said it is examining Thailand’s submission. “We have received the information from the Thai government, and it is currently under review,” Ambassador at-Large Luis CdeBaca of the Office to Monitor and Combat Trafficking in Persons said in a statement to Reuters.

Plight of the Rohingya

The next TIP Report will appraise Thailand’s anti-trafficking efforts in 2013.

That year ended with the State Department and the United Nations calling for investigations into the findings of a December 5 report by Reuters. That article asserts a secret Thai policy to remove Rohingya refugees from Thailand’s immigration detention centres and deliver them to human traffickers waiting at sea.

The report says Thailand identified 1,020 trafficking victims in 2013, compared to 592 in 2012, and almost doubled the government’s anti-trafficking budget to 235 million baht ($7.3 million).

It identified victims by nationality, counting 141 people from Myanmar among the victims. But none were Rohingya, who are mostly stateless. The Myanmar government calls the Rohingya illegal “Bengali” migrants from Bangladesh. Most of the 1.1 million Rohingya living in Myanmar’s western Rakhine State are denied citizenship.

In January 2013, said the Thai report, more than 400 Rohingya illegal migrants were found in rubber plantations near the Thai-Malay border in Thailand’s Songkhla province. Seven Thai suspects were arrested and charged with smuggling and harbouring of illegal migrants, and were later convicted.

The Thai report describes this group of Rohingya as being smuggled, not trafficked.

However, the Reuters article in December references documents suggestive of a Thai policy to remove those Rohingya from immigration detention centres and deliver them to human traffickers and smugglers waiting at sea. Many Rohingya were then ferried back to brutal trafficking camps in Thailand, where some died, the article reports.

The official Thai report says the government “has made every effort to suppress the smuggling of Rohingyas over the years and to reduce the risk of Rohingyas being exploited by transnational trafficking syndicates.”