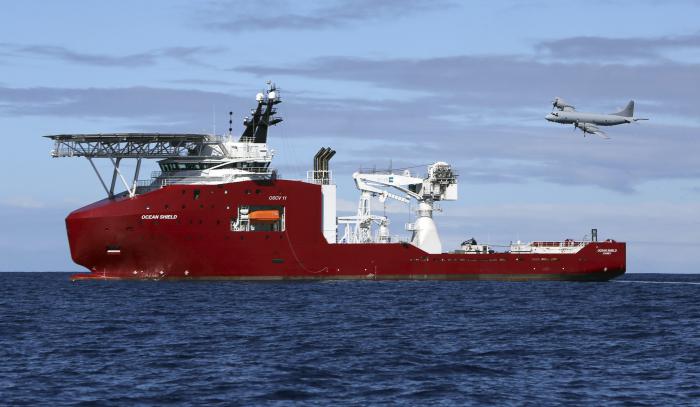 PHUKET: A new acoustic signal was detected in the hunt for Malaysia Airlines Flight MH370 on Thursday, further boosting confidence that officials are zeroing in on the missing plane after weeks of searching.

The signal, which could be from the plane’s black box recorders, brings to five the number of “pings” detected in recent days within the search area in the Indian Ocean.

The first four signals were detected by a U.S. Navy “Towed Pinger Locator” (TPL) aboard Australia’s Ocean Shield vessel, while the latest was reported by an aircraft picking up transmissions from a listening device buoy laid near the ship on Wednesday.

“Whilst conducting an acoustic search this afternoon a RAAF AP-3C Orion aircraft has detected a possible signal in the vicinity of the Australian Defence Vessel Ocean Shield,” Angus Houston, head of the Australian agency co-ordinating the search, said in a statement.

The data would require further analysis overnight but it showed the potential of being from a “man-made source”, he said.

The mystery of Malaysia Airlines Flight MH370, which disappeared more than a month ago, has sparked the most expensive search and rescue operation in aviation history, but concrete information has proven frustratingly illusive.

The black boxes record cockpit data and may provide answers about what happened to the plane, which was carrying 227 passengers and 12 crew when it vanished on March 8 and flew thousands of kilometres off its Kuala Lumpur-to-Beijing route.

But the batteries in the black boxes have already reached the end of their 30-day expected life, making efforts to swiftly locate them on the murky ocean floor all the more critical.

“We are still a long way to go, but things are more positive than they were some time ago,” Martin Dolan, chief commissioner of the Australian Transport Safety Board, which is involved in the search mission, told Reuters.

Up to 10 military aircraft, four civil aircraft and 13 ships are involved in the search effort that has proven fruitless in identifying any physical evidence of wreckage from the flight.

Efforts are now focused on two areas – a larger one for aircraft and ships about 2,240 km (1,392 miles) northwest of Perth and a smaller area about 600 km (373 miles) closer to that west Australian city.

The smaller zone is around where the Ocean Shield picked up the acoustic signals and where dozens of acoustic sonobuoys were dropped on Wednesday.

Each of the sonobuoys is equipped with a listening device called a hydrophone, which is dangled about 1,000 ft (305 metres) below the surface and is capable of transmitting data to search aircraft via radio signals.

“That does provide a lot of sensors in the vicinity of the Ocean Shield without having a ship there to produce the background noise,” said Australian Navy Commodore Peter Leavy, operational head of the Australian search.

But experts say the process of teasing out the signals from the cacophony of background noise in the sea is a slow and exhausting process. Operators must separate a ping lasting just 9.3 milliseconds – a tenth of the blink of a human eye – and repeated every 1.08 seconds from natural ocean sounds, as well as disturbances from search vessels.

An autonomous underwater vehicle named Bluefin-21 is also onboard the Ocean Shield, and it could be deployed to look for wreckage on the sea floor once the final search area has been positively identified.

As with so many things in this unprecedented search effort, experts say that will not be easy.

“Working near the bottom of the ocean is very challenging because this is uncharted territory; nobody has been down there before,” Erik van Sebille, an oceanographer at the University of New South Wales, told Reuters.