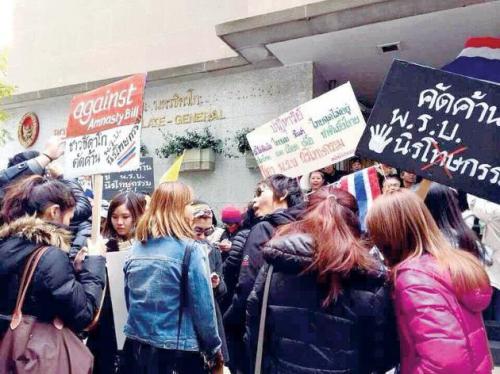 
Amnesty bill protests spread to other countries
The Nation / Phuket Gazette
PHUKET: Opposition to the controversial amnesty bill has expanded beyond Thailand’s borders, with Thai expatriates and students in several countries also staging their own protests.

The sound of whistles seems to be echoing around the world as Thais in a number of countries gather to express their disagreement about the bill.

There have been protests in the United Kingdom, the United States, Germany and Australia – and there will likely be a few more to come.

Thais in London are planning to gather in the Old Palace Yard outside the Houses of Parliament today from 9am to 11am. About 500 people have selected “attending” on the event’s Facebook page.

They will sign the petition against the amnesty bill, announce their reasons for the protest, sing the Thai national anthem and other uplifting songs and then, to further raise awareness, they will spend two minutes blowing their whistles.

Also tomorrow, at 11am in The Hague, Thais are scheduled to rally at the Thai Embassy against the amnesty bill.

In the Australian city of Melbourne, there will be another protest opposing the bill in front of Federation Square, during which protestors will wear black shirts.

The Thai Student Association of Victoria has played a major role in the propagation of news about this event.

Next Tuesday, there will be a protest in front of the Consulate General of Thailand in New York, starting at 11am. The rally is being organised by Pailin Kumsiri, Arnond Sakvoravit and Risa Atsakul.

Already this week, Thais in Frankfurt gathered on Thursday to protest against the bill, while a costume-maker along with other Thais gathered to show their opposition to the bill in front of the UN Plaza Civic Centre in San Francisco.

On Tuesday in Australia, 500 Thai students and residents in Sydney, New South Wales, and from the nearby states of Queensland and Victoria, organised a protest in front of the Thai Consulate-General, led by Pornpet Songkijanuwat and Surasak Duangrat, managing editor of Thai-OZ, a Thai-language newspaper in Australia.

Along the way, the protestors loudly called for the ousting of Prime Minister Yingluck Shinawatra and raised banners opposing the bill.

In the US Thursday at noon, Thais gathered in front of the Thai Consulate in Chicago to protest against the amnesty bill.

Meanwhile, the public outcry at home against the government-backed legislation continued unabated yesterday.

More groups of people and organisations came out publicly to protest against the proposed law that would absolve all those involved in political offences since 2004, including politicians convicted of corruption and those having committed severe crimes. Among the groups protesting against the bill yesterday were more than 1,000 staff members of the national carrier Thai Airways International, 500 officials from the Finance Ministry, and more university students and medical staff in many provinces.

The Federation of Thai Industries yesterday resolved to oppose the amnesty bill in support of the fight against corruption.

FTI chairman Payungsak Chartsutipol said the board had agreed to oppose the bill because it would absolve people convicted of corruption.

He warned, however, that the ongoing protests against the bill could lead to political confusion, and he called on those involved to help restore normalcy as soon as possible.

Payungsak insisted that FTI was an organisation with no political affiliation, and that it was merely concerned with the possible negative impact of the latest political

confrontation on the country’s economy.

Meanwhile, red-shirt supporters of the government – numbering a few hundred in total – held separate gatherings in Chiang Mai, Pathum Thani and Rayong yesterday to express their backing for the Pheu Thai-led administration and the amnesty bill.

Amidst the political uncertainty, Thai stocks weakened further yesterday, with the Stock Exchange of Thailand Index closing at 1,405.03 points, a decline of 20.20 points or 1.41 per cent.


Senate fails to kill amnesty bill
The Nation / Phuket Gazette
PHUKET: The blanket amnesty bill is still “alive” after the Senate yesterday failed to form a quorum to deliberate the controversial piece of legislation. The Senate had been expected to reject the bill, which was rushed through the House of Representatives.

The meeting of the 149-member Senate was scheduled to start at 2pm yesterday, but two hours later, only 69 senators were present – still short of the 75 needed for the quorum.

The so-called Group of 40 dissident senators boycotted the meeting, saying they wanted to wait until Monday to debate the amnesty bill, as per the original schedule. Amid the lack of quorum, the Senate speaker waited for more senators to join the meeting and meantime allowed members to discuss the bill. The meeting broke for a recess at 4.30pm.

Senate Speaker Nikom Wairatpanij later met with the Group of 40 and failed to convince them to attend the meeting. Nikom resumed the meeting and told the chamber a consensus had been reached between both wings of the upper House to reject the bill in its first reading on Monday at 10am. The Speaker’s words brought vocal protests from senators who wanted to continue with the debate.

Pornthip Hirunkate, vice president of the Tourism Council of Thailand, showed her disappointment with the impasse. Questioning the motives of senators who chose not to attend the meeting, she lamented their failure to help reduce the political heat with a decision on the bill that the business sector had been hoping for.

“The experienced senators showed a different view from the business sector’s. We’re worried about the situation and want politicians to act. But as they chose not to act, we could just sit and watch,” she said.

The Stock Exchange of Thailand index yesterday also shed 20.20 points on Friday or 1.42 per cent, to 1,405.03, purely on political concerns.

If the Senate rejects the bill, the House, where Pheu Thai has a majority, could still vote to reaffirm it after a 180-day period.

However, the bill’s continuing existence may spur more people to join protest rallies over the weekend.

The delay until Monday also suits the opposition Democrat Party’s strategy, as the International Court of Justice will deliver on Monday its verdict on the Preah Vihear dispute. A ruling that Thailand must cede territory to Cambodia would hand protesters even more ammunition with which to attack the government.

Ms Pornthip added that she is concerned that the Senate’s meeting on Monday coinciding with the judgement on the Preah Vihear temple boundaries could be a double blow to the country. “I just hope that all love the nation enough not to destroy it.”

Moreover, rally leader and Democrat MP Suthep Thaugsuban’s ultimatum comes with a threat that if Pheu Thai fails to “kill the bill”, the opposition will not accept the original amnesty legislation proposed by Pheu Thai MP Worachai Hema. So, the government has no choice but to remove the bill eventually, or risk protesters broadening their push against the amnesty bill in a bid topple the government or forc