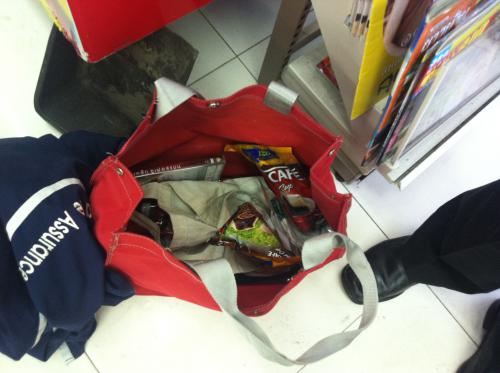 PHUKET: A passerby in Phuket Town helped an off-duty police officer chase down a man who allegedly stole a bag of instant coffee from a 7-Eleven convenience store early yesterday morning.

Kampanart Rattanamuay, 34, was found by police with five bags of coffee, a DVD and a pair of gloves.

“By the time we arrived, Mr Kampanart had already been captured and was sitting on the floor in the middle of the store,” Sub Lt Seree Halem of the Phuket City Police said.

It was Sub Lt Jarin Songmuang of the Thalang Traffic Police who heard the cries for help from a store clerk and leapt into action.

“I was walking to the store when I heard a woman shouting that a thief was about to take off on a motorbike – I tackled him, but he fought back, trying to run away,” Lt Jarin told the Phuket Gazette.

Unfortunately for the perpetrator, a passerby joined Lt Jarin in apprehending the man.

The 7-Eleven store manger, Thanyarat Yasom, 45, spotted Mr Kampanart acting suspiciously after he had entered the shop earlier and, believing he had stolen items from the store, confronted him outside.

“The man left the store, but he was acting strange, like he was hiding something in his shirt. I ran out to him and asked if he had stolen something,” Ms Thanyarat said.

“I kept asking him to tell me, threatening to shout. Instead of saying anything, he threw the bag of coffee and ran,” she said.

Police suspect that the other products found with Mr Kampanart were stolen from other shops.

Letter from the Phuket Governor: Improving the island step by step, his way