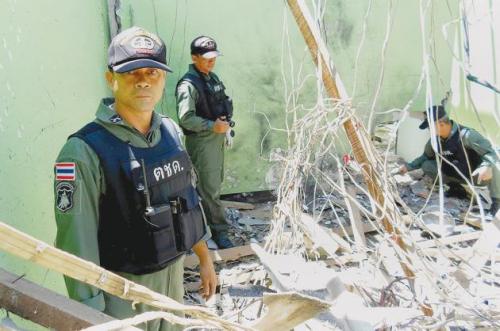 
Rising costs greatest threat to govt
The Nation / Phuket Gazette
PHUKET: The increasing cost of living was cited as the major factor threatening to weaken public support for the Yingluck government in a poll by Assumption University.

Higher cost of living was cited as the most likely cause of a drop in support for the government by 85.2 per cent of the 2,115 respondents in 17 provinces. Charter amendment (81.9 per cent) was the second most cited threat to the government’s stability.

Of all respondents, 73.8 per cent believed that constant efforts to explain its policies to the public could strengthen the government’s stability, while 55.9 per cent said they want the Yingluck government to complete its four-year term.

A separate poll by Suan Dusit showed that the Thai public expects the political conflict to intensify, following opposition leader Abhisit Vejjajiva’s speculation that a general election may take place late this year.

Asked if they wanted to see a vote late this year, 44.80 per cent said no, saying it would be a waste of money and lead to political instability.

Red-shirt leaders Jatuporn Prompan, Apiwan Wiriyachai and Pakorn Buranupakorn were reported to be likely appointments as ministers in the next Cabinet reshuffle expected early next month, according to a source from the ruling Pheu Thai Party.

Suranand said although all the names shown in the press are knowledgeable and suitable candidates, the PM has not thought of reshuffling the Cabinet now, adding that Yingluck has a tight work schedule in May and June.

Suranand said the party had been checking who was behind the rumour as it suspected the role of political opponents trying to shake the government’s stability.

Dr Weng Tochirakarn, a leader of the Democratic Alliance against Dictatorship (DAAD) denied having any knowledge of Jatuporn’s likely appointment as deputy Interior Minister. He also disapproved of criticism that Jatuporn’s taking up of a Cabinet post would affect the longevity of the government.

Pheu Thai Party spokesman Prompong Nopparit said the Cabinet reshuffle report was just a rumour, adding the PM has not sent any signal to the party executive board about her intention to make changes to the Cabinet.

He also rejected criticism that Jatuporn would be like “lightning rod’ that would cause the government to collapse, saying if Jatuporn is given a Cabinet post, it means he has the potential to help push government policies in Parliament.

Suporn Attawong, deputy secretary-general to the PM, said Jatuporn deserved a Cabinet post because he had “helped the party to the best of his ability on the battle frontline”.

Suporn asked reporters if his name is also in the list with Jatuporn, adding while wiping away mock tears that he would be hurt if he was not included.

DAAD leader Thida Thawornseth congratulated Jatuporn if the report about him is true.


Assistant teachers to be fired in cheating scandal
The Nation / Phuket Gazette
PHUKET: Six newly appointed assistant teachers in Nakhon Ratchasima accused of being involved in exam cheating will be dismissed – while the Department of Special Investigation (DSI) has called for an ultimate total of 344 people allegedly involved in the scandal to lose their jobs as government officials.

Education Minister Phongthep Thepkanjana will soon discuss with his deputy minister if he will set up a disciplinary committee to inspect high-ranking officials suspected of wrongly declining to perform duties, which led to the exam scandal.

The DSI had advised the office and 118 other offices to dismiss 344 assistant teachers accused of cheating in the exam.

Of these 344 suspects, 48 assistant teachers allegedly involved in the scandal were from Nakhon Ratchasima.

Pisit said his office was reported to have eight people accused of being involved. He was waiting for an official letter from the Office of the Teacher Civil Service and Educational Personnel Commission (OTEPC) to allow OTEPC’s subcommittees in each educational zone to revoke the appointments of the alleged cheaters. He will then attend a meeting with the subcommittee in his educational zone and later send a letter to instruct schools to dismiss six of the assistant teachers.

The DSI could also summon for interrogation another two alleged cheats who had not been appointed assistant teachers.

Previously, Phongthep insisted that OTEPC’s meeting clearly resolved last Friday that the 344 cheats would be removed from their positions as government officials.

Phongthep said Deputy Education Minister Sermsak Pongpanich would soon report to him findings concluded by a fact-finding panel on the exam cheating. They would discuss if he should set up a disciplinary committee to inspect four high-ranking officials at Office of the Basic Education Commission accused of wrongly refusing to perform duties or not.

He added that the accused officials would be allowed to explain.


Four arrested for blast at hotel
The Nation / Phuket Gazette
PHUKET: Four suspects were arrested on Saturday in connection with an explosion at a Narathiwat hotel in the morning that left six people injured.

The bombing took place at around 11am at Asia Hotel, in Sungai Kolok district of the southernmost Muslim-majority province. Rooms 306 and 307 on the third floor of the hotel were severely damaged. The impact of the explosion brought down the ceilings of both rooms.

An explosive ordnance disposal team inspected the hotel following the explosion. Police said they believed the explosion was caused by a home-made explosive device weighing at least five kilograms. The bomb was hidden in a bin that served as an ashtray.

Police are trying to find out whether the hotel was the target of the insurgent attack or whether a bomb intended for an attack elsewhere went off prematurely while insurgents were putting it together, according to hotel owner Amporn Wongthirarit.

Six persons – five women and one man – were wounded in the explosion. All of them were sent to Sungai Kolok Hospital for treatment.

Asia Hotel is not far from the Pro Computer and OA Thailand companies, which were severely damaged by