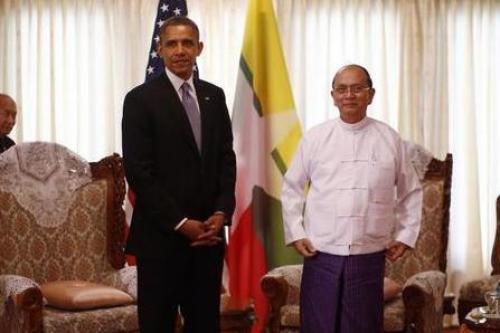 
Obama walks a fine line with Myanmar president’s landmark visit
Reuters / Phuket Gazette
PHUKET: President Barack Obama will walk a fine line between fostering a U.S. ally in China’s backyard and trying to defend human rights when the president of Myanmar becomes the first head of his country to visit the White House in 47 years on Monday.

Rights groups and some U.S. lawmakers fear Obama has moved too quickly since forging a dramatic breakthrough in relations in 2011 after half a century of military rule in Myanmar, also known as Burma.

At least 192 people died last year in violence between ethnic Buddhists in Rakhine and Rohingya Muslims, who are denied citizenship by Myanmar. Most of the victims, and the 140,000 people made homeless in the attacks, were Muslims.

The Myanmar government’s rights record has long been poor, especially in resource-rich areas inhabited by ethnic Shans, Karens and Kachins.

The Washington-based U.S. Campaign for Burma says 1,100 ethnic Rohingya and 200-250 Kachin have become political detainees in the past year, and the situation has led some to question how far Washington should go in its policy shift.

“When they abuse ethnic minorities, it really undercuts their credibility and undermines our ability to work with them,” said Republican Representative Trent Franks, one of a group of U.S. lawmakers arguing for lifting U.S. sanctions more slowly.

Obama administration officials believe that to deepen and sustain the reforms, Thein Sein has to be able to demonstrate tangible benefits to overcome opposition from powerful military leaders. To back that, Washington has narrowed the scope of its ban on business dealings with Myanmar officials and businessmen.

“Yes, there is still more work to do but … the progress they have made has been significant and they have put in place an ambitious reform agenda and we encourage them to keep doing more,” State Department spokeswoman Jen Psaki told reporters on Friday, after Myanmar freed 23 political prisoners.

On Monday, the two countries are expected to announce plans to work out a Trade and Investment Framework Agreement that would lead to regular talks on boosting trade, labour standards and investment, a business leader familiar with the issue said.

Even critics in Congress of Obama’s Myanmar policy support the U.S. strategic goal of bringing Myanmar, a nation of 60 million people tucked between China and India, out of its isolation from the West.

The long U.S.-Myanmar estrangement was a drag on America’s relations with ASEAN, the 10 nation Southeast Asian regional grouping that looks to Washington as a counterbalance to the more assertive China of recent years.

Ernest Bower, senior adviser for Southeast Asia at the Center for Strategic and International Studies, said improving relations with Myanmar fits into the wider U.S. policy of revitalizing its Asia-Pacific relationships.

“Myanmar is the keystone state that links China, Southeast Asia and India, and if we didn’t get it right, we wouldn’t be able to play the chess game that is required in order to deal with China,” he said.

But the concerns about rights abuses are holding back a fuller U.S. embrace of Thein Sein, a retired general, who was taken off the U.S. Treasury Department’s Specially Designated Nationals visa blacklist last year to facilitate engagement.

Thein Sein was a close confidante of former military ruler Than Shwe, who ran Myanmar for 19 years, a period that saw mass jailing of opponents, the gunning down of pro-democracy protesters and widespread abuses in ethnic minority areas.

Jennifer Quigley, head of the U.S. Campaign for Burma, said that even without the killings in Rakhine, the Myanmar military’s heavy hand in forced land seizures and corrupt trade in natural resources in Kachin and other states in multi-ethnic Myanmar should give Western countries pause.

Myanmar’s most coveted resources – natural gas, minerals, gems and timber – lie in ethnic areas that have been war zones for decades and remain largely untouched by reforms, she said.

“Our biggest concern about welcoming Thein Sein to the White House is that it reinforces this positive impression of him and of what is going on in Burma, while we have serious misgivings that he is not interested in pursuing critical reforms,” said Quigley.

The military has run Myanmar since a 1962 coup by Ne Win, whose 1966 visit to Washington at the invitation of President Lyndon Johnson was the last such visit by the country’s head of state.

The European Union has moved faster than the United States on Myanmar, lifting its last sanctions on trade, the economy and individuals last month, although it retains an arms embargo.

Earlier this month, Obama scrapped a ban on U.S. entry visas to Myanmar’s military rulers and their associates but kept sanctions on investing or doing business with figures involved in repression since the mid-1990s.

Franks and Democratic U.S. congressman Rush Holt are using budget legislation to press the Obama administration to hold back on expanding nascent U.S. military ties with Myanmar’s armed forces until the country stops abuses of ethnic groups and enacts reforms to reduce the military’s huge role in the economy.

“The Burmese military is the historic perpetrator of human rights abuses, and, one may presume, also the current perpetrator, so sanctions against them should be the last to go,” said Holt.

Launches by the North of short-range missiles are not uncommon but, after recent warnings from the communist state of impending nuclear war, such actions have raised concerns about the region’s security.

“North Korea fired a short-range missile as it did yesterday into its east sea in the afternoon, ” South Korea’s news agency Yonhap reported, citing a military official.

A South Korean defence ministry official confirmed the Yonhap report, but did not provide any details.

Tension on the Korean peninsula has subsided in the past month, having