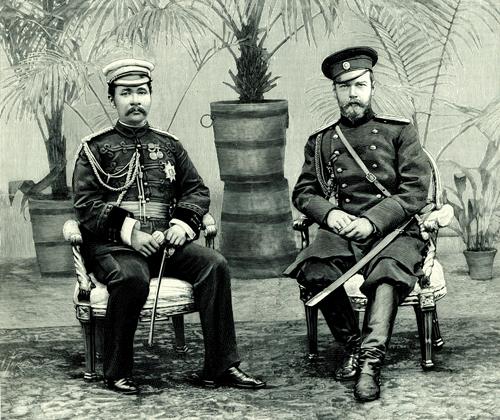 PHUKET: Phisak Nivataphand, the president of the Thai-Russian Chamber of Commerce and advisor for the Russian Studies Center of Chulalongkorn University, was recently in Phuket to give a speech to promote Thai-Russian business relations.

Organized by Thai-Russian media firm Expert Media Co Ltd, the seminar was held on May 10 at the Royal Phuket Marina.

Mr Phisak opened his speech by noting that this year marks 116 years of established relations between Thailand and Russia.

“Thais should not forget the kindness and generosity that His Majesty Czar Nicolas II of Russia had extended to the Kingdom of Siam during the so-called Imperialism Period,” he said, referring to when Russia stood firmly behind Siam as a friend amidst aggressive French and British colonial polices.

He noted that such an alliance had a part in helping Siam maintain its sovereignty. He then highlighted the fact that a Russian translation of the book on His Majesty the King’s
bibliography and noble deeds for Thailand throughout the past 60 years, had been voted, in Vladivostok, Russia, as the Best Book of Russia 2009.

Mr Phisak highlighted factors anyone considering to do business in Russia should keep in mind.

“When we talk about Russia, we have first to understand that Russia is the biggest country in area in the world, with some 17,075,400 square kilometers, about 30 times bigger than Thailand, and with nine time zones, extending to Europe in the west and touching Asia – China, Japan and the Koreas – in the east.

“As such, from a marketing point of view, one has to segment out distributors or agents as it would be rather difficult for one single party to cover the entire area.”

Likewise, since transportation costs will be involved, pricing and delivery times are something to be closely considered, he stressed.

“Moreover, the terms and methods of payment are also significant factors to consider when doing business in Russia,” he said.

For his next point, he also turned to address the handful of Russians in attendance.

“With apologies to our Russian friends, the fact is that because international monetary or financial procedures in Russia are not that standardized, it is not that easy or reliable to send or ship any goods on consignment or ‘pay upon receipt’,” he said.

Though, such a swap has not yet materialized, he pointed out that China and Thailand had already initiated a swap as of 2012.

“Last year, Thailand welcomed 1,317,387 Russian visitors. The question is: who makes gains when Russians have to exchange rubles into US$, and then exchange US$ into baht to spend in Thailand?

“After that, what is left over in baht needs to get exchanged back into US$ again and back into rubles when back in Russia.

“While some banks in Thailand have started to accept Rubles, it is not yet official,” he said.

No apparent rush for Russian
The move to have Russian language courses at higher-education institutions in Phuket remains on hold while academic staff wait for students to return to full-time studies so they can assess demand.

“We have to wait for the new semester to begin at the Prince of Songkla University Phuket campus so we can gauge student-demand for the courses. There must be at least 40 students enrolled in the program to make it viable,” Mr Santi said.

Commenting back in February, Santi said, “Many Russian tourists have been coming to visit Phuket for several years now, so we would like to enable Thai people to make a living by using the language to earn money from these tourists. There are very few Thai people who can speak good Russian. That’s why Russian companies have to hire Russian people to work, which upsets Thais.”

In addition to Thais learning Russian, Mr Phisak of the Thai-Russian Chamber of Commerce told the Gazette that he wants to push for organizing Thai language classes for Russians in Phuket.

“Many Russians coming here don’t have good English skills, let alone Thai. However, in order to avoid more problems like we’ve seen in recent years, whether in Pattaya or Phuket, for example, I think it’s important for Russians to learn Thai, especially if they plan to visit or do business here,” he said.

This article appears in the current issue (May 18-24) of the Phuket Gazette newspaper, niw on sale at newsstands throughout the island. Digital subscribers may download the full issue, this week and every week, by clicking here.