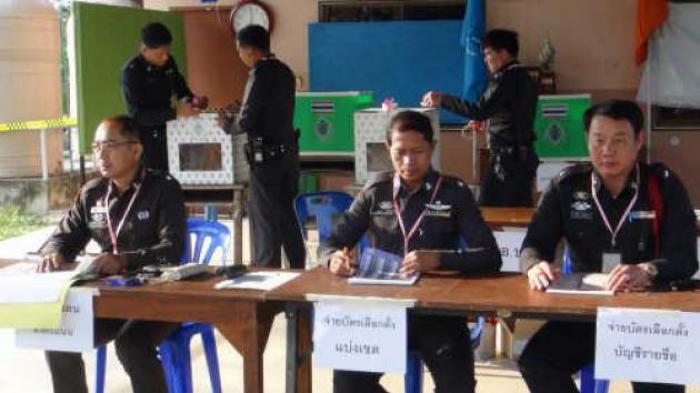 PHUKET: RE-RUNS of the widely disrupted general election opened peacefully yesterday in five provinces, poll authorities said, in the first move to complete a troubled vote that could provide a mandate for a new government. But the turnout for the election in the five provinces was only 10.2 per cent, with 9,835 voters participating.

The election on February 2 failed to ease the months-long political crisis after anti-government protesters seeking to topple caretaker Prime Minister Yingluck Shinawatra obstructed the vote in many opposition strongholds.

The Election Commission said the results would not be announced until voting had been completed in all constituencies, as well as in the party-list system, setting a rough deadline of April.

A total of around 120,000 people were registered in 101 constituencies across five provinces for yesterday’s vote, election commissioner Somchai Srisutthiyakorn told AFP.

“The polls are going peacefully – everything is under control and there are no problems,” Mr Somchai said.

A trickle of voters arrived at two polling stations early yesterday in Phetchaburi – one of the affected provinces south of Bangkok – according to an AFP reporter, but there were no signs of obstruction of the polls.

Until the full results are announced, Ms Yingluck remains in a caretaker role with limited power over policy.

Under Thai election law, 95 per cent of the 500 seats in the Lower House of Parliament must be filled to enable a House convening session before the appointment of a new government.

The main opposition party, which boycotted the vote, in February lost a legal bid to nullify a controversial election.

Mr Somchai said the EC would invite four political parties to hold talks on Friday in Songkhla to discuss using measures and methods in the five provinces that have proven successful in solving problems that may arise from elections in the remaining provinces.

He dismissed criticism the EC was unable to hold the election quickly in all remaining provinces, reasoning that each province had its own problems.

The EC would allow an election to be held only in provinces that are ready and where the agency was confident polling could be held without violence.

Meanwhile, His Majesty the King yesterday signed a royal decree for a Senate election on March 30 for elected senators whose term expired yesterday.

The candidacy registration for the Upper House election has been scheduled for tomorrow until Saturday, Somchai said.

He said in some provinces, the MP election and senatorial election could be held on the same day, March 30, as the King had endorsed the royal decree for the Senate election.

PHUKET: US Secretary of State John Kerry has called on Thailand to investigate “politically-motivated” attacks, denouncing the deaths of several children as “horrifying”.

“As allies and close friends of the Thai people, we are profoundly saddened by the deaths and injuries that have shaken the country,” Mr Kerry said in a statement on Friday.

“I call upon Thai authorities to investigate these attacks swiftly and bring those responsible to justice,” he said, adding “violence is not an acceptable means of resolving political differences”.

Thai opposition protesters seeking to force Prime Minister Yingluck Shinawatra from office said on Friday night that they would abandon most of rally sites in the capital, ending their “shutdown” of Bangkok, which has lasted about four months.

Violence linked to the rallies has left 23 people dead and hundreds wounded in recent weeks, including four children killed in two separate grenade and gun attacks on opposition rallies.

“As a father and grandfather, the death of several innocent children is particularly horrifying, and must at last be a wake-up call to all sides to refrain from violence, exercise restraint, and respect the rule of law,” said Mr Kerry.

He insisted that the United States does not take sides in Thailand’s politics, saying it was up to the Thai people to resolve their differences.

But he highlighted US concern about “the employment of other tactics that undermine Thailand’s democratic values and processes, inhibit compromise, and further exacerbate political tensions”.

“All sides should commit to dialogue in the spirit of seeking common ground to address differences and find a peaceful, democratic way forward,” he added.

All rally sites except the one at the Government Complex on Chang Wattana road were closed.

Mr Suthep, together with co-leaders and Student and People Network for Thailand’s Reform (STR) co-ordinator Uthai Yodmanee, led the protesters from the Pathumwan rally site to Lumpini Park Sunday morning.

In a related development, protesters from other protest venues – Asok, Silom and Ratchaprasong – have been moved to join the rally at the Lumpini protest site.

However, Buddhist monk Phra Buddha Issara did not move to join the Lumpini rally site.

The monk stood firm that the Chaeng Wattana stage would remain.

Mr Suthep on Friday announced an end to “Bangkok Shutdown,” which started on Jan 13 in an attempt to oust the caretaker government in order to pave the way for political reform.