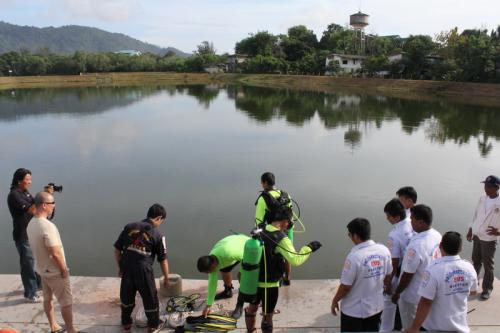 PHUKET: The 28-year-old owner of a Phuket beauty salon is believed to have committed suicide due to the stress of overwhelming debt.

Local residents spotted the body of Dussadee Ngoy-phutorn, from Sakon Nakhon, in a lagoon behind Phuket Rajabhat University (map here) at 7:20am today.

Ms Dussadee, owner of the My Mint beauty salon in Samkong, Phuket Town, was last seen standing and crying by the side of the lagoon before dawn.

“A local resident rode past and saw Ms Dussadee standing and crying near the pond at about 4am today,” Phuket City Police Capt Rachan Phunwai told the Phuket Gazette.

“However, when he rode back about an hour later, she wasn’t there. Only her purse and some tissues were left near the pond,” he added.

Divers from the Kusoldharm Foundation were called in to recover her body.

“Inside her purse, all we found were cosmetics and a debit card,” Capt Rachan said.

One of Ms Dussadee’s neighbors told police she had money problems.

“She had not paid her rent, electric or water bills for months. Her rent was due again today,” he explained.

“Yesterday, her shop was closed. Last month, a neighbor saw her throwing belongings around inside her shop. Apparently she shouted, ‘Take whatever you want, I will go kill myself’,” he said.

“We found no wounds on the body. However, we had her body taken to Vachira Phuket Hospital to confirm the cause of death,” he said.

Laguna Phuket Marathon to be still bigger and better next year