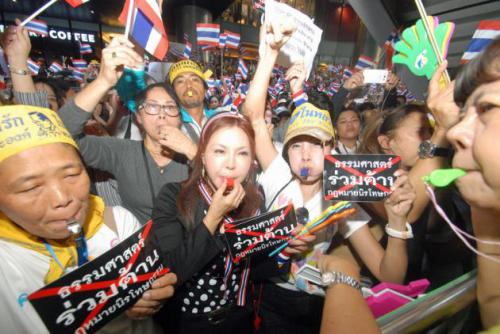 
Protesters refuse to back down until bill is dropped
The Nation / Phuket Gazette
PHUKET: Several groups of protesters said they would not stop rallying against the government’s blanket amnesty bill even if the Senate rejects the draft.

This declaration came despite the fact that Prime Minister Yingluck Shinawatra said on Tuesday that her government would accept the Senate’s decision, provided the bill is thoroughly deliberated on.

Phakin Issayaworachot, a protester from the Student and People Network for Thailand’s Reform, however, said his group will continue protesting even if the bill is rejected by the Senate because the House of Representatives can still pass it 180 days later. He also said he had no faith in Yingluck.

“I will only stop protesting when it is actually rejected in the House,” Phakin said.

Another man at the rally said he would continue protesting because this government was corrupt and he believed it would push the bill through.

Somkiat Homlaor, leader of the Business Club for Democracy (BCD), added that Yingluck was just avoiding her responsibility and passing the buck on to the Senate. However, he said, the very fact that the bill was rushed through at 4am last week was enough reason not to trust her.

Meanwhile Chalisa Thammawong, president of Thammasat University’s student organisation, said she would wait for the Senate’s decision on Monday and might stop protesting unless the draft returns to the House.

Separately, in a move to check the sentiment on social media, Jin Somroutai posted this question on her Facebook timeline: “If the Senate rejects the amnesty bill, will you stop your protest?”

Here are some of the responses:

Angie-ja Pongvutitham said: “I will keep protesting because my goal is for this House to be dissolved.”

Wara Laksana said: “Even if the Senate rejects the bill, the House can still decide to push it through. The Senate is only a rubber stamp, but the people can be the political machinery to stop it.”

Picha Rattanadilok, a member of the National Institute of Development Administration, called on the 310 MPs who voted for the bill to take responsibility and step down. He was speaking on behalf of the People’s Assembly Reforming Thailand group.

The Business Club for Democracy also called on the MPs to apologise to the public.

Out of 60 countries and territories where English is not the mother tongue, Thailand manages only 55th place – outdoing only Panama, Kazakhstan, Algeria, Saudi Arabia and Iraq, according to the EF English Proficiency Index.

The survey on adults was conducted by the global leader in international education, EF Education First, which is based in Zurich, Switzerland.

“We found that by engaging in a national dialogue about English, stakeholders can help align goals, improve incentives and focus on teaching English for communication. The economic impact of such a coordinated programme is clear.”

All over Asia, Thailand’s ranking is only above Kazakhstan. Leading the regional league is Malaysia with a score of 58.99 score, followed by Singapore. The others – India, Hong Kong, South Korea, Indonesia, Japan, Vietnam, Sri Lanka, Taiwan and China – are all over 50 points, while Thailand gained only 44.44.

The survey was conducted in the realisation that English is now a communication tool in the globalised era, when work becomes more delocalised and information more decentralised.

Educational institutions, driven by the demands of society, are increasingly embracing English language learning. Many school systems now require English study starting in primary school, much as they do math or science. University professors are delivering lectures in English to prepare their students better for life after graduation.

Companies both large and small, international and domestic, are mandating English as their corporate language. And individuals, whether jobseekers or ambitious parents, are pouring money into private English training.

“Some Asian countries, in particular Indonesia and Vietnam, have transformed their English proficiency over the six-year period. China has also improved, although less dramatically. Japan and South Korea, despite enormous private investment, have declined slightly,” the report said.

In another report on “Doing Business in English”, EF Education First noted that an increasing number of companies have recognised the long-term advantages to productivity and growth that adopting English as a common company language can have. Nokia, SAP, Samsung, Aventis and Renault have already mandated English as the corporate language.

Joining its peers in 2010 was Rakuten, Japan’s first and largest online marketplace. The primary challenges were to make sure the new policy was implemented uniformly, to motivate employees to raise their level of English quickly without undermining their self-confidence and to minimise productivity losses during the period when many employees’ English was still limited.

“It is clear to many business leaders that English is increasingly a key component of their competitiveness. Many companies, both large and small, are taking the logical next step by asking their employees to use and improve their English every day in the workplace.”

Other key findings include the fact that seven European countries, excluding France, that show the strongest English are all small European nations, whose size compels them to adopt an international outlook. The Middle East and North Africa are the weakest regions in English.


Rice panel to mull urgent Bt140bn loan for pledging
The Nation / Phuket Gazette
PHUKET: The Finance Ministry will propose at today’s meeting of the National Rice Policy Committee that the panel consider approving an emergency short-term loan worth Bt140 billion to finance the rice-pledging scheme.

Bank for Agriculture and Agricultural Cooperatives (BAAC) president Luck Wajananawat yesterday said the request would be raised at the meeting, and that the loan would be used to cover rice pledging during the 2013-2014 harvest season.

If the committee approves the short-term loan, it will be forwarded for Cabinet consideration. If then approved by the Cabi