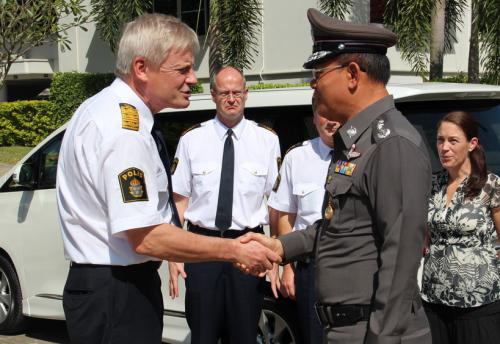 “The way they presented it here, it is the best way [for police] to work: with volunteer tourist police and to be near the citizens, near the tourists, to be among them. That is the best way to police a community,” he said.

Commissioner Svenson’s comments followed a briefing on the workings of the Phuket Police yesterday at the Phuket Provincial Police headquarters in Phuket Town.

Commissioner Svenson said he was not aware of any major complaints about the behavior of Swedish tourists holidaying in the Kingdom, or specifically in Phuket and the Andaman region.

“I have not heard complaints about Swedes in Thailand. If any are doing wrong, we hope the police will act against them, but we haven’t heard anything like that,” he said.

However, the Swedish police chief reminded his fellow Scandinavians, “When tourists visit a country, they have to abide by the rules of that country.”

Region 8 Commander Panya pointed out that more than 190,000 Swedish tourists had visited Phuket since January.

However, he added, “Only about 10 police cases have involved Swedes.”

“If you could arrange volunteers to help us with translation, the clearer communication would allow us to carry out our work faster,” he said.

Phuket rescue too late for chicken

Phuket expats risking lives on the road to stay in paradise