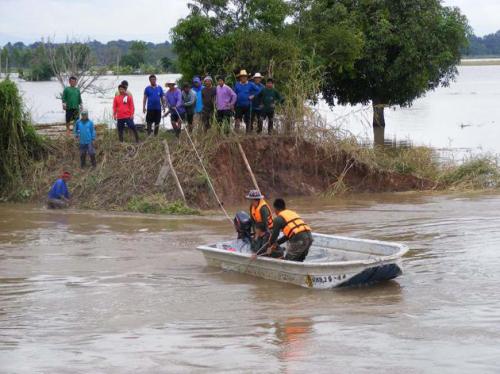 
PHUKET: Twenty-five provinces – mostly in the North, Northeast and East of the country – remain flooded, though the situation is improving, says the Department of Disaster Prevention and Mitigation.

Seasonal flooding, which has hit 32 provinces since September 17, has affected 2.86 million people and left 27 dead, said Chatchai Phromlert, director-general of the department.

Among the 25 provinces still suffering, 21 have been hit by flash floods, and four others – Ayutthaya, Angthong, Sing Buri and Suphan Buri – by overflowing rivers.

“In general, the situation has improved. Water levels have receded in many areas although there is still flooding in low-lying areas and areas along riverbanks,” Chatchai said.

Prime Minister Yingluck Shinawatra said yesterday that she had instructed provincial authorities and the Department of Disaster Prevention and Mitigation to survey the flood damage so that compensation could be paid to those affected.

Yingluck said the government was ready to compensate victims according to the level of damage suffered, but she declined to confirm whether the flat rate of Bt5,000 paid to victims of the 2011 flood crisis would be repeated.

The prime minister said she wanted to see “more integration” among the state agencies responsible for tackling the flood crisis.

Meanwhile, flooding has forced Prachantakham Hospital in Prachin Buri to suspend admission of new patients, according to Public Health Minister Pradit Sinthawanarong. He said the hospital’s wastewater treatment system has not worked since it was hit by floodwater.

New patients who need to be hospitalised would be sent to Kabin Buri Hospital, he added.

The minister also said that he has instructed the management of |57 hospitals at risk of flooding in |10 northern and northeastern provinces to work to the best of |their ability to safeguard their hospitals.

In Prachin Buri alone, 16 hospitals and clinics run by the Ministry of Public Health have been flooded, according to Narong Sahametapat, permanent secretary for public health.

He said health officials are on the alert for breakouts of disease related to the floods.

Deputy permanent secretary for Public Health, Wachira Pengjuntr, who heads the ministry’s “flood war room”, said that most of the 27 victims of the latest crisis had drowned.

In 2011, Thailand suffered its worst flooding in half a century. More than 800 people were killed and 37.5 million rai (6 million hectares) of agricultural, industrial and residential land were devastated.

Many of the country’s industrial estates, which export electronic parts, auto parts and hard-disk drives, were swamped, as were large parts of Bangkok.