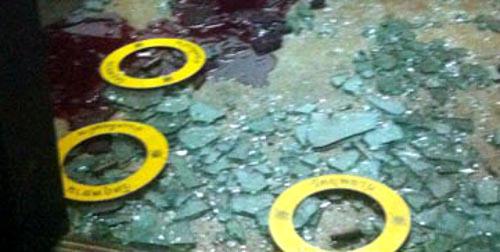 PHUKET: A former Krabi village headman who owned a security company was gunned down at the site of a new job early yesterday morning, along with two of his staff.

The three men were shot in a security box at the entrance to the Krabi Rubber Plantation Research Center in Lam Thap just after midnight.

Witnesses said the three men were talking in the sentry box when a pickup truck pulled up and at least three men got out.

The assailants opened fire on the small room, then went inside and started shooting again before fleeing the scene, said Inspector Jessada Saengsuree.

“Their bodies were riddled with bullets,” he said.

Police inspected the security box, which was full of broken glass, and found 30 bullet cases believed to have come from automatic weapons, including an M16, he said.

“We also found two shotguns, which we think belonged to the victims,” he said.

Mr Amorn had just won the bid to provide security for the rubber research facility and it was the firm’s first day of work.

Mr Amorn had arrived at the site to check on his men when they were all killed, Lt Col Jessada said.

Police speculate that a private or business conflict motivated the murders, and believe the gunmen were hired professionals.

Police have yet to reveal whether or not the case is related to the shooting in Khlong Kanan Subdistrict last year, when gunmen opened fire on a moving pickup truck in a well-planned ambush.

In that shooting, the village headman of Baan Khlong Wai Lek was killed (story here).