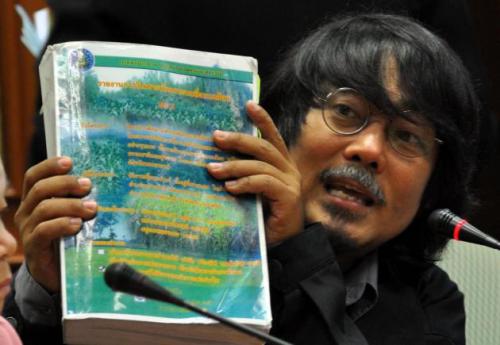 
PHUKET: The Standing Committee on National Security yesterday proposed that the Water and Flood Management Commission (WFMC) explain to the public the likely impacts of the Mae Wong Dam project in a show to be aired on Channel 9 on October 13.

The show would follow an episode of the “Khon Khon Khon” (People Searching People) programme on environmentalist Sasin Chalermlarp’s 388-kilometre anti-dam march that is due to air on October 12.

Suphot, in his capacity as secretary-general of the Office of the National Water and Flood Management Policy, offered information about the project to the panel on behalf of Deputy PM Plodprasop Suraswadi, who chairs the WFMC.

While saying the dam wouldn’t be able to tackle all flood problems, Suphot told the committee that the project was necessary, as it was part of a larger upstream-to-downstream flood-management system.

He said the EHIA report compiled by the Royal Irrigation Department was being scrutinised by experts, who would invite Sasin and affected people to give details to ensure a more complete report. He said that though the Cabinet okayed the dam’s budget and construction schedule, commencement of the project had to wait on the EHIA report.

Sasin said the EHIA report didn’t include information on the ecosystem, and failed to listen to all sides’ opinions. The report-making procedure comprised only four meetings, two of which he attended.