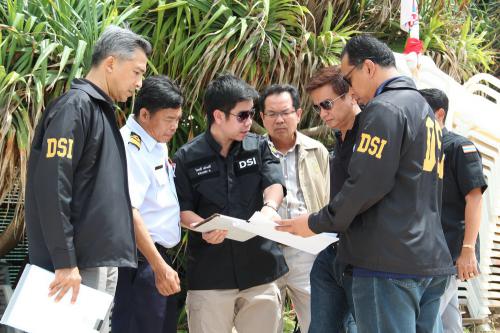 The resort, owned by Patong Mayor Pian Keesin and his son Prab, was the only resort along Patong Beach that was inspected yesterday.

However, the raid yielded no results, despite officers being armed with a land document for the site.

“We cannot say whether or not the hotel has encroached onto public land since the documents we have are not clear enough,” Minister Somsak said.

“We can take no further action today as the intended target has been tipped off and is not present to be questioned,” he added.

Mr Somsak told the press he was merely following up on his complaint filed with the Department of Special Investigation (DSI) in Bangkok on July 10.

“I also came to follow up on mafia operating in Phuket as I have received expressions of concern from many ambassadors about tourists being threatened, attacked, assaulted and overcharged by local taxis,” he said.

“I wanted to talk with the person who has been called ‘mafia’. I wanted to ask why people with such power do not use their influence to control people to do the right thing.

“When such people have the power to do illegal things, all the people under their control are willing to break the law, and this is despite Phuket having beautiful beaches that should be the place of polite people.

The minister was oblique in naming his intended “target”, despite having stood beside DSI Chief Tarit Pengdith on August 9 when that leading law-enforcement officer named Pian Keesin and his son Prab as “mafia” figures under DSI investigation (story here).

Mr Pian has been suspended from active duty as Patong Mayor while he fights allegations of vote fraud in last year’s Patong mayoral election (story here).

Meanwhile, Mr Prab has been vocal in his opinion of the current DSI campaign to “clean up Phuket”, calling on the DSI to tackle corruption among government officers and the ranks of law enforcement officials (story here).

“We should stop playing innocent. We all know who is behind illegal businesses in Phuket – it is those who can choose whether to arrest people or to let them go,” Mr Prab alleged earlier this year.