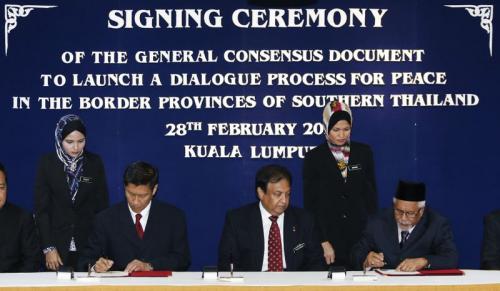 
New administration strategy for South set to be discussed
The Nation / Phuket Gazette
PHUKET: All eyes will be on the first official peace talks scheduled for next Thursday between the separatist movement Barisan Revolusi Nasional (BRN) and Thai officials, during which a proposal to set up a special administrative region in the southern border area is likely to be discussed.

Turning the strife-torn parts of the predominantly-Muslim Deep South into a special administrative region has long been touted and discussed as possibly key to ending insurgent violence.

A formula invented by former prime minister Chavalit Yongchaiyudh, which calls for establishment of a Pattani metropolitan administration, appears to be detailed and arguably the most practical one so far.

Chavalit came up with the idea of a special administration region – with the tag “under the Constitution” to avoid opposition – and made it public when he was deputy prime minister in the short-lived Somchai Wongsawat government.

His plan is based on three strategies: “multi-coloured flowers” or coexisting through cultural diversity; “three-step-back”, which discourages confrontation and encourages mutual understanding; and the Pattani metropolitan administration unit, which encourages “restoration through a local administration which accommodates local culture and the Muslim ways of life”.

Chavalit is widely known for several peace initiatives. He served as an Army commander and later as a civilian coordinator after he famously resigned from the military five years before his retirement in order to push his scheme of seeking pardons for communist fighters, which eventually ended their armed struggle in the early ’80s.

This successful scheme is known also as the PM’s Office Ministry Order 66/23.

The term “Pattani metropolitan administration” is rather confusing for most, and critics usually amplify this confusion by adding the word “state” to it.

Making it a “Pattani state administration” would denote autonomy to a degree, thus making it unconstitutional and an automatic point of objection for both the authorities and members of the public who have suffered at the hands of insurgents for nine long years.

Though Pheu Thai presented it as a key policy during the general election two years ago, nothing has materialised so far as the ruling party won no seats in the three southern provinces.

However, the idea of a special administration region has been extensively accepted as a way out for long-term peace through discussions at the community level, involving a network of 25 groups of peace activists and community leaders.

The network has been expanded and now boosted to become the “Council of Social Communities in Southern Border Provinces”, which is arranging discussions among local residents at more than 200 events, under the guidance of King Prajadhipok’s Institute, which has been studying various models and accommodating peace efforts.